Two relatively large investments have emboldened the Italian startup community in the past few days. The sums themselves, of €12m and €10m ($12.8m, $10.7m), are not huge but are still pretty decent and far bigger that those the local ecosystem is accustomed to.

The two funding rounds may have occurred so closely together by coincidence. On the other hand, some may see them as a signal that changes are afoot in the otherwise puny local Italian tech scene.

At €12m, the larger of the two funding injections has been raised by Talent Garden, a Milan-based coworking network with spaces all across Italy and in some other European nations: Spain, Albania, Romania, Lithuania, and soon France.

Founded in Brescia, a small city in the north of Italy, TAG has gone from startup to Europe's largest coworking provider in just five years.

During that period, it has diversified its core business, from simply renting office and shared desks to becoming a hub for a bunch of innovation-related activities.

A key component of this strategy was the launch in 2015 of training courses for developers and other professionals, which the firm says had been highly requested by startups and by traditional companies willing to make use of digital technologies. 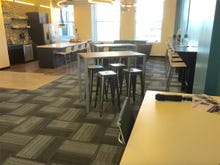 5 reasons to consider a coworking space

Working at home is great, but there are disadvantages that can be addressed with a space in a coworking facility.

According to data provided by the company, TAG's innovation school had 250 graduates this year and is planning to open new branches around Europe, starting with Spain in 2017.

"We focus not only on providing the perfect spaces for people to work in, but also on building a platform for collaboration," Talent Garden CEO Davide Dattoli said in a statement.

He said this year alone the company has run more than 500 events, connecting individuals across its network with one another, and with larger corporates, such as IBM, Disney, Cisco, and Vodafone, which recognize the value in working with smaller, more agile businesses.

It is the second-largest investment made into a European coworking network. The largest, $24.38m, was raised in October by London-based competitor Second Home.

As for the other round, it involved tourism tech startup Musement, which obtained $10m in a series B investment round aimed at improving the app and expanding internationally.

The 'digital travel companion', as it calls itself, offers a one-stop shop for travellers interested in finding the main attractions of a city and booking a museum visit or buying a ticket on the fly for a concert. Launched in 2013, it currently operates in 450 cities across 55 countries.

Whether or not the timing of the operations is just a coincidence, it is fair to say that 2016 was the best year so far for the Italian startup ecosystem, even though in terms of investment value the numbers are still very small.

In 2015, as tracked by publication StartupItalia, new Italian tech firms raised just short of €100m. As of this month, and including these latest deals, this year's funding amounts to roughly €160m.

But numbers do not always tell the whole story: a single, huge investment could skew the score. However, in this instance that is not the case, because the growth seems to be caused mainly by a number of mid-scale or small deals. It's modest growth, but it seems to have strong foundations.

Perhaps even more notable is the presence of international investors in TAG's funding round. So far, Italian startups seem to suffer from an image problem: the bel paese is usually seen by foreigners as a tourist destination, rather than an innovation powerhouse.

Having big names like McClure and, indirectly, Hoffman on board, might help the local ecosystem finally appear on the radar of other international investors, giving the scene's growth the boost it certainly needs.