For the first time, the top 10 supercomputers in the world operate at a petaflop scale as China continues to move up the high-performance computing charts to chase the U.S.
Written by Larry Dignan, Contributor on June 20, 2011

For the first time, the top 10 supercomputers in the world operate at a petaflop scale as China continues to move up the high-performance computing charts to chase the U.S.

Japan’s K Computer, which can crunch more than 8 quadrillion calculations per second, is the top supercomputer, according to the Top 500 list of high-performance systems.

The K Computer, housed at the RIKEN Advanced Institute for Computational Science in Kobe, puts Japan back in the top spot for the first time since Nov. 2004.

On Monday, the Top 500 list was outlined at the International Supercomputing Conference in Hamburg. These systems are ranked based on their Linpack scores, an application designed to solve dense linear equations.

The biggest takeaway on the list is that a system needs to operate at a petaflop per second scale to break the top 10. The U.S. has five systems operating at a petaflop scale, Japan and China have two each and France has one.

Japan’s K Computer bumped the previous top dog—China’s Tianhe-1A supercomputer. The K Computer is built by Fujitsu and has 548,352 cores, or 68,544 SPARC64 VIIIfx CPUs with eight cores each. It’s also notable that the K Computer doesn’t use graphics processors or accelerators. 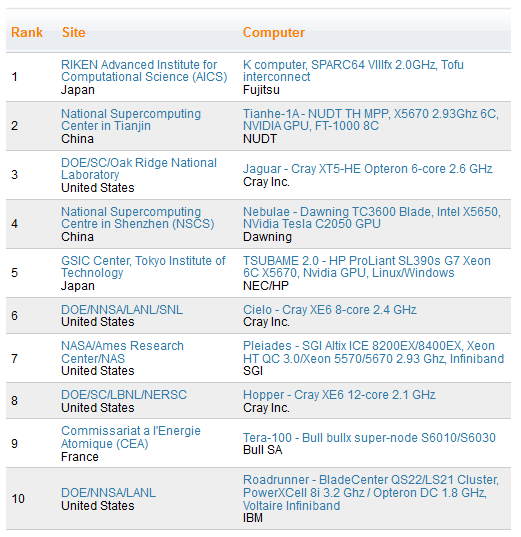 Other odds and ends: