Full Bio
Posted in Between the Lines on October 30, 2013 | Topic: Enterprise Software 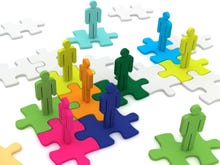 The social business platform reported a net loss of $18.7 million, or 27 cents per share (statement).

Wall Street was actually expecting a loss at 15 cents per share on a revenue of $36.74 million. Nevertheless, shares slipped in after-hours trading from a close at $12.72 per share to roughly $11.30.

CEO Tony Zingale maintained an optimistic outlook in prepared remarks, keeping the focus on long-term, rather than immediate, results:

Jive reported solid third quarter financial results, which exceeded our guidance from both a revenue and profitability perspective. The progress we made was a result of more focused go-to-market execution and more effective messaging to both business leaders as well as key influencers in the enterprise's IT organizations. We believe that Jive's new Fall Cloud release, introduced last week at JiveWorld13, further reinforces our multi-year technology lead, and combined with our demonstrated customer success, positions Jive well as the industry continues to move to the mainstream.

For the current quarter, Wall Street is expecting a slightly larger loss at 16 cents per share on a revenue of $40.05 million.

Jive couldn't meet that demand, offering a Q4 revenue guidance range of $38.5 million to $39.5 million with a loss per share projected to fall around 15 to 17 cents a pop.

For the full year, Jive predicted revenue will fall between $145 million to $146 million with a loss of 55 to 57 cents per share.

Join Discussion for: Jive's Q3 earnings loss not as bad as expected...