Welcome to the first article in what I expect to become an ongoing series: Kickstarter Hands-on. For years, I've avoided covering anything having to do with Kickstarter because of the chancy nature of some of the projects.

But because Kickstarter's rules have evolved to require prototypes for physical projects, the odds of getting what you "back" has increased. That said, I am explicitly not recommending you back any projects. I am also not evaluating projects based on the team or their viability.

Instead, I will devote the occasional Kickstarter Hands-on to evaluations of products I can actually hold and use. That way, we can look at innovative projects and ideas and at the same time be sure the project has made it far enough in the prototyping stage to have small-run manufacturing so that we can test out the product for real. 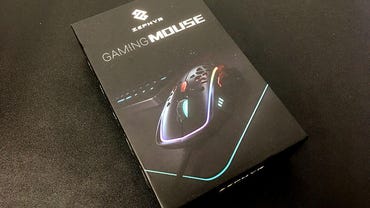 For this first review, I'm looking at the Zephyr Gaming Mouse, a wired mouse with a "built-in cooling system." In other words, the mouse has a small 1-inch or so muffin fan built right under the spot where you'd rest your palm. The mouse also has RGB lighting and three buttons.

The mouse arrived in my mail in a product-ready condition. Had I not known this was a Kickstarter project, I would have assumed it was a product already in volume production.

It came with a high-quality four-color printed box, printed instructions inside the box, and a vacuum-formed caddy for holding the mouse while shipping.

Additionally, the fit and finish of the mouse itself are top-notch. There are no burrs on the plastic, nor any indication that this might be a prototype or a 3D printed place-holder version. It feels completely like a production-final product.

So let's get the basics out of the way. It works. My wife says "It's gorgeous. I can see why people might want one."

I've been using it for a while now, and I'm writing this article using the mouse. It performs just as well as any other mouse I've used.

To be fair, this is a mouse targeted at PC gamers. I play games on my PC, but they're mostly simulations and strategy games. I don't think you begin to form the genetic mutation that creates the unnatural craving for RGB lighting on everything until you play shooters for four hours a day or more for a substantial period.

So, while my wife thinks it's pretty, the very first thing I want to do is turn off the RGB. Let me be clear here. The RGB lighting is very nicely implemented. There's a band around the outside and color emanating from the inside.

If you love RGB, you'll love this mouse. I do not love RGB. I find it bright and distracting and I like all my technology to be monochromatic.

So, now, let's talk about that fan. It works. I don't know what the MBTF is for such a tiny spinning device, and since the Kickstarter mentioned the life of the RGB LEDs but not the life of the fan, I'm guessing the developers don't know either.

That said, the fan does what it's supposed to do, but at a slight price. If you crank up the fan, there is a noticeable vibration (like how it feels to hold an active electric toothbrush). The vibration isn't enough to cause any problems with precision mousing, but after a while, it just feels weird.

On the other hand, the fan noise isn't bad at all. There's a tiny little background whoosh while it's on, but that's about it. There's a button on the bottom of the mouse that lets you adjust the fan speed or turn the fan off entirely. I imagine that many users would keep their fans turned off, and only turn them on when they engage bodily thermoregulation and begin sweating in earnest.

I haven't gone full sweaty palm with my attempts at gaming, but the fan does feel nice as it blows air up under the palm and fingers. If you're the type of person who is just now realizing you always wanted a fan in your mouse, the Zephyr will make your dreams come true. I am curious how the fan will respond after months of eccrine gland secretions have been dripped onto it, but hey, there's a mental picture you won't be able to unsmell.

I'll end with one more quote from my wife: "What a fun mouse!"

So, there you go. Let me know what you think of the Kickstarter Hands-on concept. Have you backed Kickstarter projects before? Do you get sweaty palms while gaming? Let us know in the comments below.