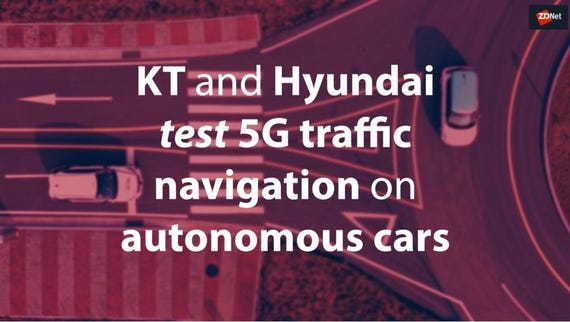 KT and Hyundai have tested their real-time traffic navigation technology on 5G networks for autonomous cars, the companies announced.

The South Korean telco, Hyundai Mobis -- the parts and services arm of Hyundai -- and Hyundai Mnsoft -- an IT solution provider for automobiles -- worked together to conduct the test.

The test was held at Hyundai Mobis' autonomous car trial centre at Seosan, Chungcheong Province, where a 5G network has been installed.

The real-time traffic navigation technology that was being trialled sends traffic data collected by cars to a server. The server then updates the map used by cars in real time with the data collected, and then sends that information to other cars for safety.

To test the speed and accuracy of the map updates, KT and Hyundai deployed three cars, dubbed M-Billy, for the trial.

The trial consisted of the three M-Billy cars being driven around the centre's track, with the front-most car being required to perform a sudden halt if a bicycle -- that was placed along the track -- blocked its passage. The second M-Billy car, which closely followed the first car, was required to read the information collected from the first car's sensors and also stop. The third M-Billy car, meanwhile, which would be further behind the other two cars, was tested to see if it could change lanes in accordance to the updated navigation data it received.

During testing, the video of the first car coming to a sudden halt was also sent to passengers of the third car via 5G network. This was done through using Vehicle-to-Everything (V2X) technology that sends car data to handsets and adjacent sensors.

KT and Hyundai said the technology would increase safety for autonomous cars and could also be used to detect jaywalkers.

The South Korean telco is a close partner in developing enterprise 5G applications with Hyundai Motor Group. The company is also currently working on a fleet management system for the latter's electric buses.

KT and Hyundai to collaborate in electric bus management

KT and Hyundai to deploy 5G networks into construction sites

KT and Hyundai Engineering & Construction will collaborate to use 5G networks for automation in construction.

The app, Macaron Taxi, currently has a fleet of 200 cars with Hyundai and Kia expected to supply it with more vehicles.