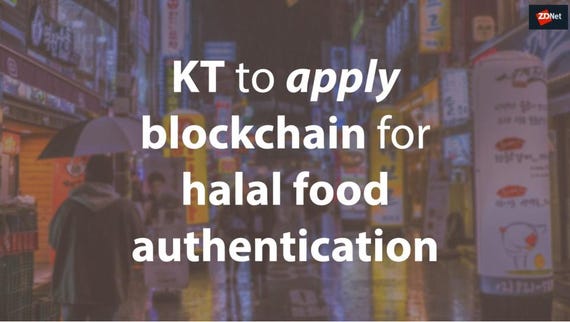 South Korean telco KT will develop a blockchain platform for use in authenticating halal food globally, the company has announced. Halal food is that which adheres to Islamic law, as defined in the Koran.

KT will work with the Korea Muslim Federation and blockchain company B-square Lab to develop the platform dubbed as the Halal Authentication Trust Platform.

The platform will process halal authentication and issue certificates for foods via blockchain. Products will get QR codes that verify their status. Customers will also be able to check expiration dates and where they were packaged.

Most current halal certification is currently done with documentation or logos on packages that are vulnerable to fraud, but the new platform will overcome this, KT claimed.

According to the federation, there will be 1.9 billion people who consume halal food and the market will be worth $3.64 trillion worldwide in 2020. In South Korea, as of the first half of 2019, a total of 1,000 foodstuffs from 300 vendors have been approved as halal by the federation.

KT has plans to eventually collaborate with global halal authentication authorities to expand the platform.

The telco applied blockchain to its commercial networks in July last year and is looking to develop platforms that can be applied in various industries.

It is also working on a blockchain mobile authentication service with Samsung and South Korean telcos and banks.