If you're having trouble understanding the grief over @TheRealNimoy's passing, here it is: Every geek just lost their favorite grandparent.

That sums up most of my sentiments about the actor.

I was first introduced to Nimoy and Star Trek by my own grandfather, Sid Esikoff, in the early 1970s, during the iconic SF series' first re-run cycle.

It was part of an almost weekly regimen during baseball season of going to dinner and Yankee games on Friday nights, a stop at Peppermint Park on the upper East Side for a scoop of ice cream, followed by staying up late in my grandparents' Manhattan apartment and watching Star Trek re-runs with Sid in his den on WPIX Channel 11. 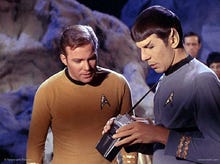 Mr. Spock's Smartphone: A spectrometer for your keychain

Consumer Physics, an Israeli start-up is bringing Star Trek "Tricorder" technology to your mobile devices to open up an entirely new world of chemometrical apps.

There, in this Manhattan high-rise man cave of sorts, I was introduced to the cool, collected Mr. Spock, and the enigmatic, emotionally charged Captain Kirk. They were polar opposites, but they complemented each other as part of an effective team.

And as my grandfather was quick to point out, both actors were Jewish, just like us. Nimoy was able to embrace the character because like Spock, he grew up as an outsider, an Orthodox Jew in the West End of Boston.

As Nimoy recalls in a 2014 radio interview with WGBH Boston,

"I identified with him a lot. He was a character that was outside the mainstream, the alien, and I grew up feeling that way. I'd felt that I was one of the minority. And Spock was not at home on Vulcan because he was half-human, he was not at home on Earth because he was half-Vulcan, the kids on Vulcan teased him because he was a half-breed, and that's why he went into the space work. I was struck by what the character had in the way of intelligence, and usefulness and professionalism and dignity. Above all, dignity. It meant a lot to me."

The now universal to geekdom "Vulcan Salute" of "Live Long, and Prosper" is actually a modified version of the priestly blessing of the temple congregation performed by kohainim, which Nimoy experienced as a young child peeking out underneath his father's tallit.

During the filming of the episode "Amok Time", Nimoy improvised his single hand, upright version of this on-camera and it stuck.

There were other actors that were considered for the role of Mr. Spock by the series' creator, Gene Roddenberry. It has been well-established that one of Roddenberry's favorites to play the role was Martin Landau, who turned down the role reportedly because he "could not play unemotional".

After Star Trek, Nimoy would go on to replace Landau in the cast lineup in his role as "The Great Paris" in seasons 4 and 5 of Mission Impossible. If you've never watched the original Mission Impossible series and are a Nimoy fan, I highly encourage you to catch it on Netflix.

I don't know how Star Trek would have turned out with Martin Landau as Spock. It would have indeed been a different show, especially if Jeffrey Hunter had kept his role as Captain Pike after the filming of the series' pilot.

Landau is a highly accomplished actor, one worthy of respect. But it is difficult to say if Star Trek would have had the same impact on generations of viewers if Nimoy wasn't part of the equation.

Beyond the fond memories which I tie to my own family growing up in the 1970's I cannot express any more strongly how important the character of Spock was to forming the idea of becoming a technologist later on in my life. 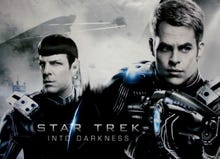 In 1966, NBC released an iconic but short-lived series that would inspire generations of inventors to bring about changes in our daily lives with technology that was once within the realms of strictly science fiction.

My family, at least on my father's side, was one of medical professionals. My father was a general practicing dentist and his father, an orthodontist, who was for a time president of the New York Dental Association. My aunt, his sister, became a highly successful ophthalmologist.

Suffice it to say I didn't want any part of that stuff after experiencing it firsthand.

I got my genetic disposition for writing from Jack Perlow, who was never far from his Smith-Corona manual typewriter.

But my love for tech and science came from Sid Esikoff. And Sid, who was a US Army Statistical Control expert during his time in the Mediterranean theatre and worked with early IBM tabulation systems loved Mr. Spock.

I think many kids that become infatuated with Star Trek tend to identify with Kirk because he is the leader, the CEO-type, the classic Type-A. Dr. "Bones" McCoy, the consummate but irascible medical professional, was his shrink.

Those of us who are more introverted and tend towards the sciences and technology typically empathize more with Spock, Uhura and Scotty. If you think about it, the trio formed a highly effective IT team, one which I think would be the model of performance and diversity for any major corporation's technology staff today.

Spock, along with Uhura and Scotty made working in sciences and technology cool. Before that, anyone who was mucking around with computers and sitting in labs was considered to be a reclusive, weird person, and there was certainly a social stigma attached to it.

Today, we have Apple, Microsoft, Google and the Big Bang Theory. Sure, nearly 50 years after Star Trek first aired on television, we're still geeks. But we're cool, and we're worthy of others' respect.

And to a large extent, we have Leonard Nimoy and Mr. Spock to thank for that. For which I will always be grateful.