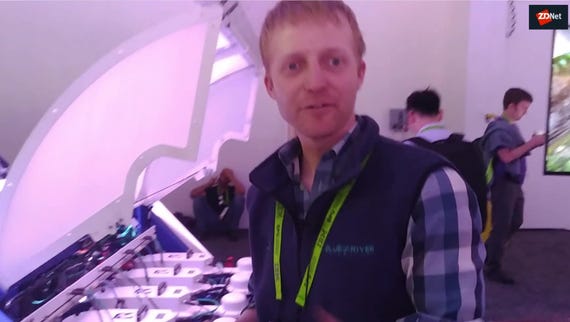 LettuceBot is made up of a number of modules containing a pair of cameras and an actuator that makes life and death decisions on plants and weeds when a human-driven tractor rolls through the crop. In simple terms, the first camera takes an image to size up the situation, that image is processed to detect crop plants from weeds, and a decision is taken on whether to spray the plants with chemicals. The second camera is at the rear to verify the actions.

"As we drive over the field, it's imaging, it's detecting every individual plant, it's going through and optimising which plants to keep and which ones to kill," Blue River Technology CTO and co-founder Lee Redden told Nvidia GTC on Tuesday.

"We identify in the field we've taken those actions, we then adjust corresponding geometry so in future it'll maintain the centimetre-level accuracy in this dirty, boggy environment where everything is getting busted around."

LettuceBot is currently deployed in California and Arizona, and covers 10 percent of the United States lettuce crop. The machine is able to handle 1 million plants per hour.

The service costs farmers $220 per acre. Redden said the results are a 5-10 percent increase in yield, as well as reducing the amount of chemical used by up to a factor of 10, and potentially allowing the use of non-GMO seeds and use of chemicals that were previously too expensive for broad use.

In response to the standard question of whether the machine could be modified to use laser beams, Redden said he could see a time when it is fully automated and self-driven and the human is no longer involved, where lasers or electricity could be used. But for the moment, chemicals are the most efficient method for controlling the situation.

Join Discussion for: LettuceBot wants to kill the plants farmers...