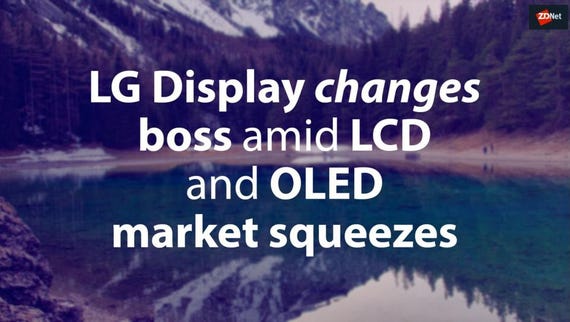 LG Display has changed its CEO in its bid to reorganise its businesses amid declining LCD profits and lackluster OLED display panel sales.

The company, which is the display panel-making affiliate of LG Group, approved the motion to name LG Chem President Jeong Ho-young as its new CEO in an emergency board meeting on Monday, LG Display said in a statement.

Current CEO and Vice Chairman Han Sang-beom had expressed his desire to resign in order to take responsibility for the company's recent profits decline, LG said.

Jeong is expected to officially take over the CEO position in the shareholders meeting in March next year but will become the acting CEO on Tuesday.

The move is highly unusual as it normally makes leadership changes during its group-wide year-end reshuffle.

LG Display had once been a profit darling for the group, but its fortunes have drastically changed since 2018 from intensifying competition in both its traditional LCD business as well as the newer OLED one.

It is losing out to Chinese rival BOE in the LCD market, while its large-sized OLED display panel business has suffered from slower than expected sales from increased competition by Samsung's QLED counterpart.

In regards to the small-sized LCD and OLED display panels used in smartphones and tablets, Chinese clients are increasingly relying on local suppliers over LG. At the same time, the South Korean tech giant cannot match Samsung's volume and yield rate when it comes to providing display panels for the more profitable mobile OLEDs.

LG Display posted operating losses of 369 billion won in the second quarter of 2019 with revenues of 5.35 trillion won, which was much lower than analysts' expectations.

But the company has increased the production capacity of its OLED factories in China and South Korea, with the goal of moving 10 million large-sized panels by 2022 to decrease unit cost and increase sales.

LG Display has also commenced the restructuring of its LCD business, halting some of its factory lines and lowering production output, and will likely now make even tougher measures under new leadership.

LG's second quarter profit has been hit hard by declines in OLED TV sales and rival Samsung's QLED onslaught. It's time for LG to drop its over-confidence and pursue a more aggressive pricing model and better warranties for its OLED TVs.

After seven years of ignoring the warning signs, LG Display's OLED TV panel business is facing a reckoning by LG Group's leadership and the market as rival Samsung jumps to MicroLED and QD-OLED panels.

LG has sent out an invitation for the unveiling of its yet unnamed next flagship smartphone to take place at IFA on September 6 that hints at strong gaming feature and dual-screen support.

Fake phone provisioning messages can allow hackers to hijack email or web traffic from legitimate devices. Nearly half of all Android smartphones impacted.