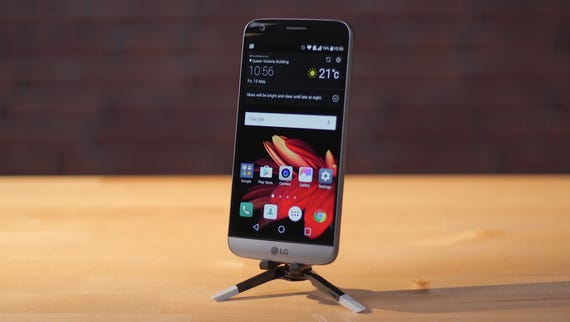 One day in the future, there will be a device that will allow you to chop and change any of its components, and it will be a glorious time to be alive.

But until then, the closest we can get is the latest flagship from LG, the G5.

Beyond its removable bottom, the G5 is a pretty run-of-the-mill flagship for 2016. It arrives with an aluminium body, sports a Qualcomm Snapdragon 820 chip, has a 5.3-inch 2,560x1,440 pixel display with a dimmed, always-on notification mode, 4GB of memory, and 32GB of internal storage.

New users to the LG fashion of putting the power button on the back may take a while to work out where it is, and in this version of the phone, it arrives with a fingerprint reader that allows for quick unlocking as well.

For old-school Android fans, the phone has both expandable storage and a removable battery.

The battery is far from the largest on the market, coming in at 2,800mAh compared to the 3,600mAh whopper on the Samsung Galaxy S7 Edge, but the use of a USB Type-C port with fast charging means a 15- to 20-minute connection to the wall will sort out any lack of juice.

The one trick in its bag that you are likely to use on a regular basis is its dual rear camera: A 16-megapixel standard camera and a wide-angle 8-megapixel camera. Given the lack of an actual zoom lens on phones, and no one really perfecting software zoom, it's an approach that works well in practice and in theory.

As with so much of this phone, the camera's performance is decent and what you would expect from a 2016 flagship Android device without going into the realm of exceptional.

For the G5, LG has once again decided that the world needs even more customised Android software, and its quality is the typical mess that phone manufacturers put out.

Take, for instance, the decision by LG to send its phone out to the masses without an app drawer, making it behave like an iPhone's home screen without a quick way to view all apps installed on the device. And even when the app drawer arrived, LG sent it out as a different launcher, meaning any customisation or widgets that the user has placed on their home screen will be junked and have to be redone if the new launcher is used.

LG also spends a stupid amount of screen space and effort to promote its own in-house apps. Although the ability to take a screenshot of part of a screen is great for phone reviewers and social media junkies, I do not see the public at large needing quick access to the tool.

One welcome change LG has made in its gallery app, though, is the ability to "lock" images. By default, any locked pictures are not shown in the gallery timeline, and a security pattern needs to be entered in order to show any locked images. This would be useful for hiding any photos of confidential documents, or pictures of confidential body parts.

Although many of the problems with LG's changes to Android can be fixed by using alternative launchers or apps, it's not something the public at large does, and anyone looking to deploy a fleet of these devices should be warned that the phone's keyboard is one of the worst I have used in a while. I would replace that sucker with Google's keyboard in an instant.

Clearly, LG intends the allure of the G5 to be its modular add-ons.

While it did not send out any add-ons with its device, the reviews from those that do have access to them are not great.

It's a process that takes a lot of work and waiting to complete, and one that is not suited to serendipitous picture taking or other short-lived moments.

When you consider that the add-on choices thus far are restricted to a camera and a Bang & Olufsen Hi-Fi audio amplifier, the choice is far from extensive.

As well as modular add-ons, LG is offering LG Friends accessories as well.

An afternoon spent playing around with the 360VR, a set of VR glasses that connect into the G5, was enough for me. They are fiddly, take a while to focus, and when that is all done, the content options for the device are far from impressive: View a 3D wallpaper, be dropped into a content package such as watching Michelle Obama give a talk, or watch 2D YouTube vids in a 3D theatre.

None of this is better than its Gear VR or Oculus competition, and feels too much like a "me-too" effort than something the company really wants to excel at.

LG should be commended for daring to do something different with its flagship, but unfortunately for Korea's other phone maker, no home run has been hit, and instead all that remains is a lot of head scratching and wishful thinking.

The G5 is a strange beast.

It does all the things you would expect from a flagship, but little more. In the end, there's little to latch onto other than the hope that more, and hopefully useful, accessories appear over time.

If this were an Apple or Samsung device, you could safely take a chance on that potential being fulfilled at some point. It's the sort of move that can be justified when you ship millions of units each quarter.

But we are not talking about one of the behemoths of mobile phone sales; this is a company that doesn't even rate a mention in shipment reports.

Therefore, it takes a leap of faith to look at this device and expect a game-changing accessory to appear -- a leap I am not prepared to make.

At the AU$1,100 mark, this phone falls squarely in the flagship pricing range, and has to compete against the best of the best from Apple and Samsung. Were the phone a few hundred dollars cheaper, it could possibly compete on price, but as it stands, it's too close to the big boys without a killer feature to best them with.

Make no mistake, this isn't a bad phone, but it's merely a good phone that misses the mark in a category where LG needs an exceptional phone to make some headway.

Check out Matthew Miller's review of the LG G5.