The development team at Linux Mint have announced the release of the LXDE version of Mint 12. The Linux Mint Distributions have two major "branches", one derived from Ubuntu which is designated by a number (currently Mint 12), and the other derived from Debian, which is designated as Mint Debian.
Written by J.A. Watson, Contributor on March 11, 2012

The development team at Linux Mint have announced the release of the LXDE version of Mint 12. The Linux Mint Distributions have two major "branches", one derived from Ubuntu which is designated by a number (currently Mint 12), and the other derived from Debian, which is designated as Mint Debian. Within each of those branches there are both "full-featured" desktops (both Gnome and KDE for Mint 12 and Gnome for Mint Debian) and "lightweight" desktops (LXDE for Mint 12 and Xfce for Mint Debian). It is important to note that the Mint LXDE distribution is not a repackaging of LUbuntu, it is created by the Mint development team from the Mint 12 master distribution. That means the choice of which packages to inlude or omit has been made by the Mint developers, which in turn means this distribution has a significantly different "flavor" than LUbuntu (do I dare say it has a "Minty Flavor?"), and the differences go much deeper than just the artwork. 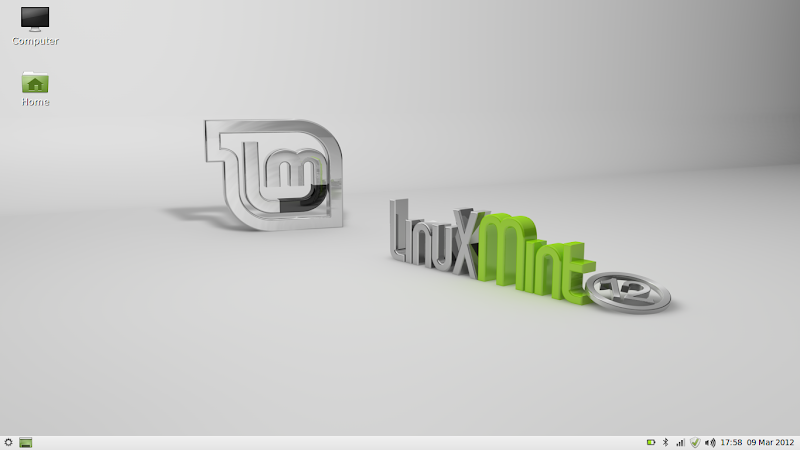 Until recently LXDE was primarily known as a "Lightweight" desktop (the name itself is an acronym for Lightweight X11 Desktop Environment), but as a result of the recent upheaval in the Gnome desktop (and Unity) it has also become popular as a good alternative for users who don't like the "new wave" desktops and want to stay with something they are familiar with and comfortable using. I will try to look at both of these aspects in this post.

Considering first the "Lightweight" aspects, the difference between the "normal" Mint 12 Gnome distribution and the LXDE distribution can be seen as soon as you finish the base installaion, as it uses about 3.5GB of disk space vs. about 5.4GB for Mint 12 Gnome and 4.6GB for Mint 12 KDE. The difference is also apparent the first time you boot the installed system, where you can see that Mint LXDE uses about 375MB of memory, while Mint 12 Gnome uses about 590MB and Mint 12 KDE uses about 750MB. (These memory use numbers were taken from my HP Pavilion dm1-3105ez, the specifics are different on other of my systems, but the relative values and ratios is consistent) The LXDE desktop is rather plain and sparse compared to the Gnome desktop, and doesn't have a lot of fancy "effects" when windows are opened/closed/resized and such. But it looks and feels faster than the standard Gnome desktop, especially on my smaller netbooks with limited CPU power and memory (such as Intel Atom and AMD E-50 systems with 1GB or 2GB of memory). The lightweight aspect extends to the selection of utilities and applications included in the base distribution. Rather than a complete Office suite such as LibreOffice/OpenOffice, there it has AbiWord for text processing and Gnumeric for spreadsheets. Those are double savings, because the packages themselves are much smaller so they save a lot of disk space and the programs are much less cpu/memory hungry as well. Of course there are plenty of other examples of the same kinds of choices yielding the same kind of savings - leafpad for simple text editing, exaile for music playing... oh, and one of my favorite examples, "http:="" lxde.sourceforge.net="" gpicview="" "="">gpicview for image viewing. If you aren't familiar with some of these, I would encourage you to take a look at their home pages, you might find them very interesting, not only for use with LXDE.

Considering the "I want a traditional desktop" aspects, the LXDE desktop will look very familiar to users of Gnome 2. It has a panel at the bottom of the screen with a cascading menu at the left end of the panel and status/controls at the right end. 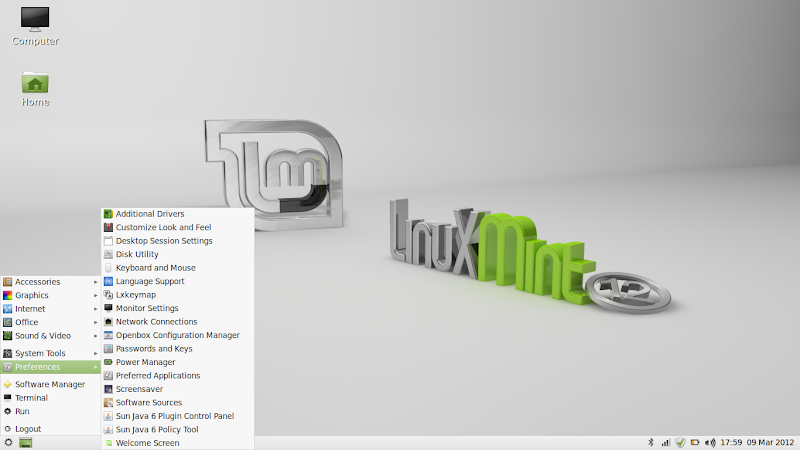 In fact the panel is a good example of the fact that although it is lightweight, there is still a good bit of power, flexibility and customisability in the LXDE desktop. Any of the applications and utilities listed in the cascading menus can be added to the desktop by right-clicking on the menu item and choosing Add to Desktop, as I have done with Firefox in the following screenshot. Right-click on the panel itself and choose Panel Settings, and you will get the Panel Preferences control window. 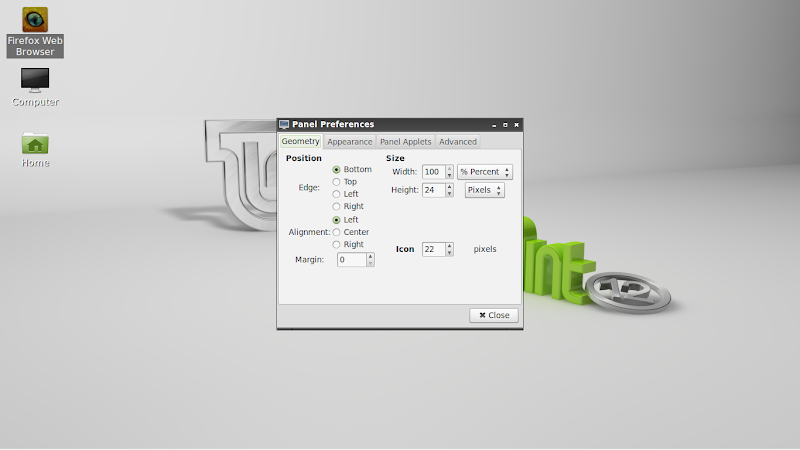 From here you can move the panel to any edge of the screen, change its alignment and size, set it to auto-minimize (hide), change what applets (plugins) are included, and of course change the cosmetics of the color and/or background of the panel. I have written several times previously about how I like to arrange the panels on netbook systems, so I won't repeat it here. I will just say that although I have written about it before in connection with the Xfce desktop, I am able to create the same setup in LXDE.

In addition to the lightweight utilities and applications that I mentioned above, Mint 12 LXDE also includes a number of the packages that users have come to expect from Linux Mint. At the top of this list are Firefox for web browsing, Thunderbird for email, the VLC Media Player and GIMP for image editing. Best of all, if you don't see what you want in the standard Mint LXDE distribution then there is the mintInstall Software Manager, which you can use to get pretty much anything you want. So you can start with LXDE as a traditional, familiar and lightweight desktop, and then build the environment you want into it by adding the packages and applications that you want and need. The result can be very pleasing.