One of the most anxiously-awaited Linux releases in quite some time is now available for download on the Linux Mint Mirrors worldwide. It has not yet been officially "announced", either on the Linux Mint web page or on Distrowatch, but I assume that will happen in the very near future.
Written by J.A. Watson, Contributor on Nov. 24, 2011

One of the most anxiously-awaited Linux releases in quite some time is now available for download on the Linux Mint Mirrors worldwide. It has not yet been officially "announced", either on the Linux Mint web page or on Distrowatch, but I assume that will happen in the very near future. A lot of people are hoping that this release will be the "Peacemaker" of the recent Linux desktop disputes, between Gnome 2, Gnome 3 and Ubuntu Unity. It is certainly a very interesting combination of an Ubuntu (11.10) base distribution minus the Unity desktop, and a Gnome 3 desktop with a large dose of Gnome-2-like user interface added to it. To me, the most impressive thing about it is that this "hybrid" was undertaken by such a small group, led by Clement Lefebvre and the Linux Mint development team.

The distribution is available in four ISO images, comprised of 32- and 64-bit versions, each in either a CD-sized image without most of the audio/video codecs and such or a DVD-sized image with pretty much everything included. All of the images are compatible with the existing Mint (and Ubuntu) Startup Disk Creator utility, so they can be easily converted to LiveUSB meida (or, of course, burned to a CD or DVD). One thing I haven't mentioned in a while, when I boot the LiveUSB image on my systems it comes up to the boot: prompt and waits for input, then I type live and press Enter to start the live image. (I fully expect someone to post a comment that says "Jamie you twit, you're doing wrong, if you fix that it will boot the live image just fine", but honestly this has never bothered me enough to take the time to look into it.)

When you boot the Live image, there is a desktop icon for the installer (this is the first hint of the Mint changes to Gnome 3, by the way). The Mint 12 installer is essentially the same as the Ubuntu 11.10 installer, it is solid and stable, asks a minimum of questions and then gets the job done. The installation takes about 10-15 minutes, after which you reboot and get the following desktop: 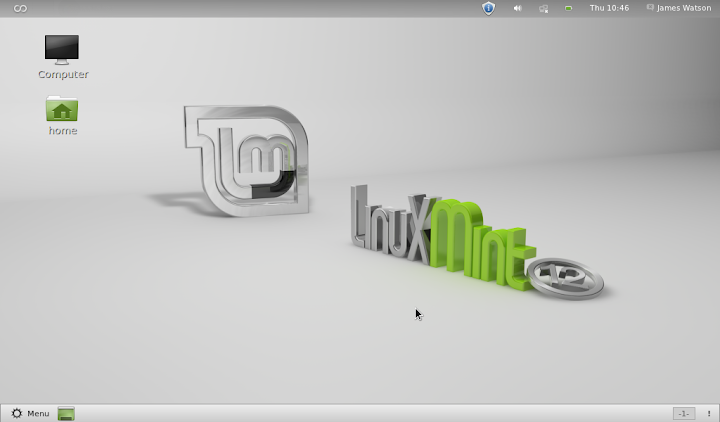 There you see what is called MSGE, the Mint Gnome Shell Extensions. If you have been following the development (and controversy) of Gnome 2 / Gnome 3, you should recognize a few bits of each of them in that screen. The top panel is clearly Gnome 3, although the clock has been moved over to the right where it used to be, and it has the Gnome 3 Activities menu at the left end, although represented by a symbol rather than the word "Activities" as in standard Gnome 3. The rest of the desktop looks decidedly Mint-11-ish (and thus Gnome-2ish), with desktop icons and a bottom panel containing the Mint Menu and Show Desktop icons. When you open other windows (applications and utilities), there will also be an icon in the bottom panel task bar for each of those, as it used to be. (Interesting note - open a window, then click the show desktop icon and watch the animation of the window minimizing. One small indication that a LOT of thought and hard work went into MSGE.)

What about functionality? Well, it is an interesting combination of Mint 11 (Gnome 2) and Gnome 3. Click the Mint Menu icon at the bottom left corner, and you get something that looks pretty much like the Mint 11 menu. It neither looks nor works exactly the same as the old Mint Menu, but it is a very good approximation created within the bounds of what is possible under Gnome 3. There are "Favorites" down the left side, and the application categories fill the rest of the window. Move the mouse over the categories and the contents of that category are shown on the right side. Start to type anything (without bothering to click on the search box) and a list of matching applications and utilities are shown on the right side. 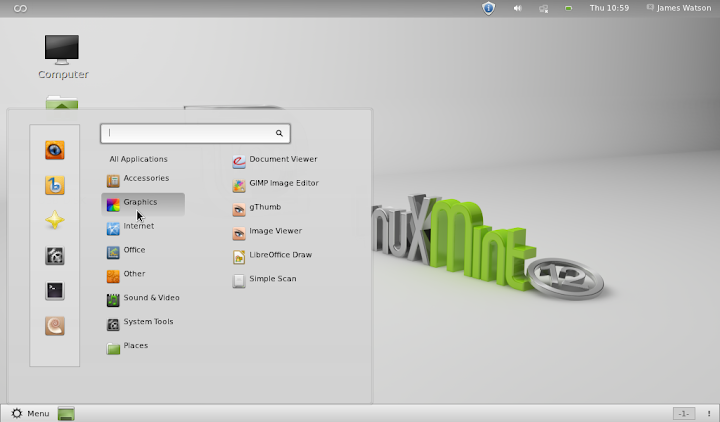 Take a different approach, and click the "Infinity" icon (is that what it's called?) at the top left of the screen, or press the "Windows" key, or just whack the mouse into the top left corner, and you get the Gnome 3 Activities Overview. I have described this several times recently, so I won't go into a lot of detail here. As far as I can tell, this is really straight from Gnome 3, no modification or customization for Mint that I have noticed. I'm pleased to see this, first because there are a number of features of this in Gnome 3 which I really like, and I'm glad to still have access to even if I am likely to use Mint Menu most of the time, and second because I think it will provide a good opportunity for dedicated Mint (and Gnome 2) users to slowly familiarize themselves with the Gnome 3 shell, and learn its features and advantages, while still working productively in a more familiar environment. 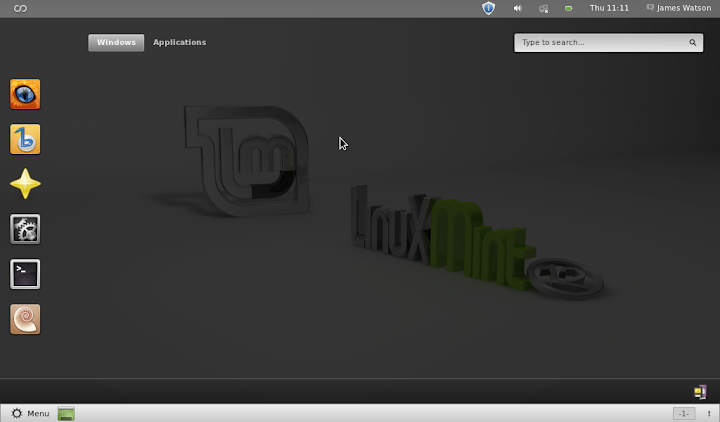 There are interesting contrasts in the underlying philosophy and functionality in these two shells. For example, go to the Mint Menu and start an application - I use a terminal window in my examples, but Firefox or pretty much anything else will do - so you have a window on the screen. Then go back to the Mint Menu, and select the same application again; you will get a second (separate) window on the screen for that application. Now, close both of those windows, and do the same thing again through the Gnome Shell. If you're not expecting this, you're in for a surprise. Clicking the same icon a second time simply takes you back to the previously opened window, if you want a new (separate) window, you have to right-click on the icon and choose "New Window". One can not overstate the amount of controversy this new behavior has created among Gnome users... at least with Mint 12, you can have it both ways!

There is a lot more to be said about Mint 12, of course. I haven't even touched on the fact that there are alternative desktops available in the base distribution. In addition to the obvious Gnome 3 standard and Gnome Classic (pseudo-Gnome 2, if you look at it with an open mind and are willing to take it with a few grains of salt), Mint 12 also includes MATE, which is a fork of Gnome 2. I don't have the time or interest to go into detail about MATE (or even Gnome Classic, for that matter), but I am sure that there are going to be LOTS of reviews and analyses posted over the next few days.