A few weeks ago, when Linux Mint Debian Edition Update Pack 4 was released, Clement Lefebvre said that a new set of ISO images including the latest update would be available "in the coming days/weeks". Today he made good on that, with the release of LMDE 201204, with both Gnome and Xfce versions.
Written by J.A. Watson, Contributor on April 24, 2012

A few weeks ago, when Linux Mint Debian Edition Update Pack 4 was released, Clement Lefebvre said that a new set of ISO images including the latest update would be available "in the coming days/weeks". Today he made good on that, with the release of LMDE 201204, with both Gnome and Xfce versions. This removes the final hurdle to my whole-heartedly recommending LMDE to anyone interested in Linux. There are a lot of good Linux distributions available, no doubt, but in my opinion this is one of the best because Clement and the rest of the development team think about their users first, all the time.

The Release Announcement is a bit sparse, because in truth this is not really a major new release for LMDE, that happened when Update Pack 4 was released, so for more details check the Release Announcement for that. These new ISO images are NOT just a respin of Update Pack 4, however, there have been some changes and some important bug fixes. One of the most significant changes is in the Gnome desktops. The original LMDE Gnome included the standard Gnome 3 shell, so if you wanted MATE or Cinnamon, you had to install them via the Synaptic Package Manager. This release includes both of them in the Gnome distribution (and does not include the Gnome 3 shell, unless my eyes and brain are deceiving me).

A quick note about the ISO images. In keeping with their determination to make things as easy as possible for their users, the Mint developers have made these "Hybrid Images". That means that you can created Live CD/USB images in the same way you always have, by burning a CD or using unetbootin, but now you can also simply copy the ISO image to a USB stick (dd if=image bs=4M of=stick). Be careful if you do that, of course, make sure you have the right source file and destination device. If you are a reasonably experienced Linux user, that is incredibly easy and convenient; if you are not comfortable with dd, filenames and device names, just stick with the traditional methods and it will all still work. Good stuff.

My previous post about Update Pack 4 included screen shots of the basic desktops and menus (and so does the release announcement, for that matter), so I won't repeat them here. But to give a small tip, and a brief look at how they differ, I will include shots of the desktop and panel settings windows. These are where you want to go to do things like auto-hide the panel and add/remove icons from the panel and/or desktop.

Another difference in this new release is the use of the MDM display manager for login and session management, in both the Gnome and Xfce versions. This is essentially a reincarnation of GDM 2.20, with some nice new graphics. The Gnome version comes with MATE as the default desktop, if you want Cinnamon you should click on the "Session" icon on the login screen and select it. When you login to MATE, you get a desktop which is very difficult to distinguish in both look and feel from the Gnome 2 desktop. When you right-click on the bottom panel, you get this: 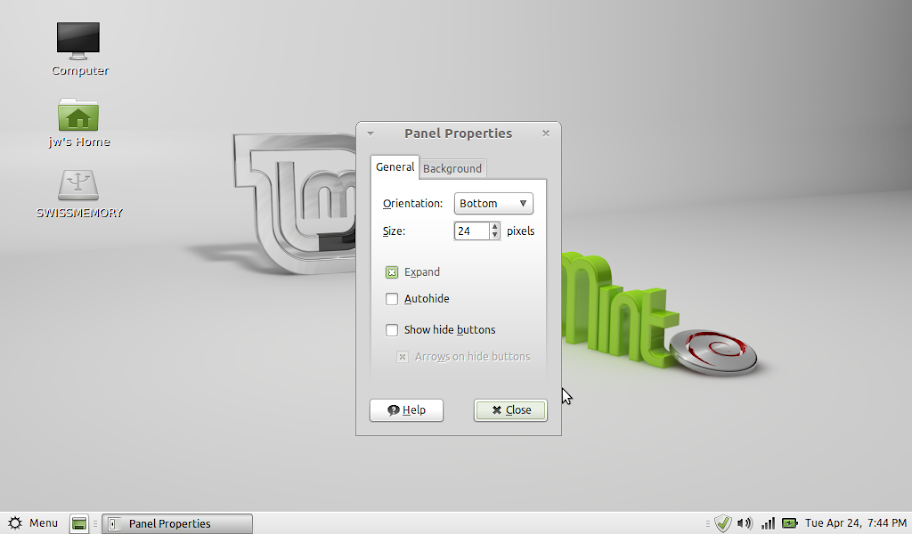 Here you can autohide the panel, move it around the various edges of the screen, and other such fun stuff. Exactly as it was with Gnome 2...

When you login to Cinnamon, you will see a small up-arrow icon on the right side of the bottom panel. Click that, and select "Panel Settings", and you will get this window: 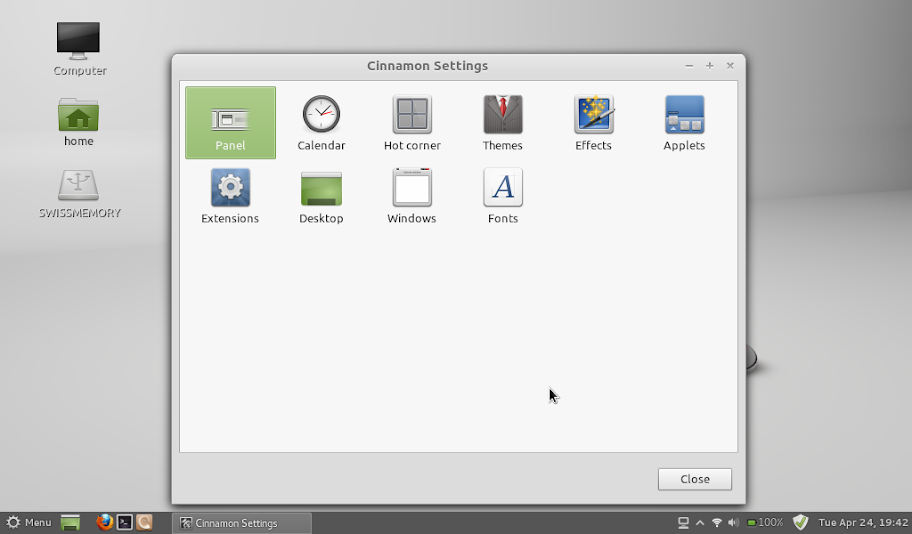 Here you can make all sorts of adjustments to the look and feel of Cinnamon. The obvious one is to select "Panel", where you can change functions and features of the panel: 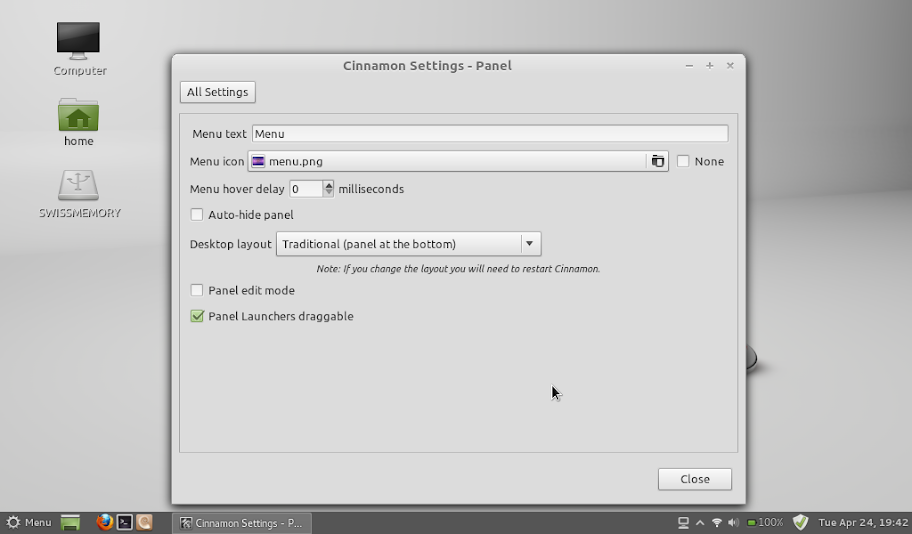 Not only can you autohide (which I always do on netbooks), but you can move the panel from the bottom to the top of the screen, or even have both top and bottom panels. Remember that if you change the panel location you have to restart Cinnamon, which means logging out and logging back in again.

Another interesting part of Cinnamon Settings is the Hot Corner selection, where you can change which corner of the screen brings up the workspace/window selection function. This one is kind of fun to look at, if you have never seen it. It shows the currently available workspaces, and the windows on each: 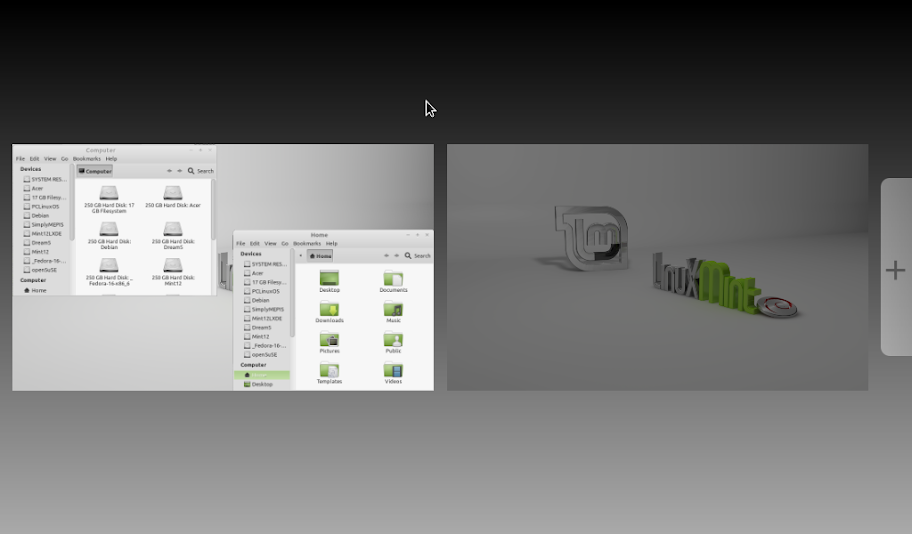 Those two desktops - MATE and Cinnamon - should be enough to keep pretty much all the Gnome users happy. Well, almost. If you are really enamored with the Gnome 3 shell, I'm sure there will be some instructions around soon on how to add it to LMDE 201204, or you can just go with Mint 12 instead. If you are not a Gnome fan, or you prefer a smaller, lighter, simpler and faster desktop, then the Xfce version should be interesting to you. It installs in exactly the same way, with exactly the same clean, simple Mint Installer, and when you boot after installation it comes up with the same MDM session manager.

Once you have logged into the Xfce version, right-click on the desktop background and choose "Desktop Settings" to get this window: 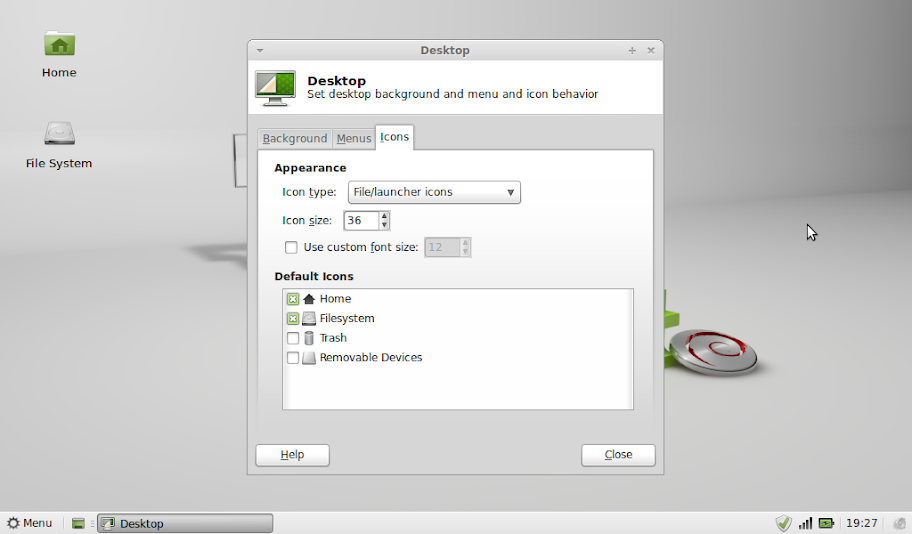 Here you can select what icons are shown on the desktop (if you have a lot of disk partitions, as I do, you will be very thankful for this), in addition to changing the desktop background, the menus and such. To change the Panel settings, right-click on the bottom panel and choose Panel / Panel Preferences to get this window: 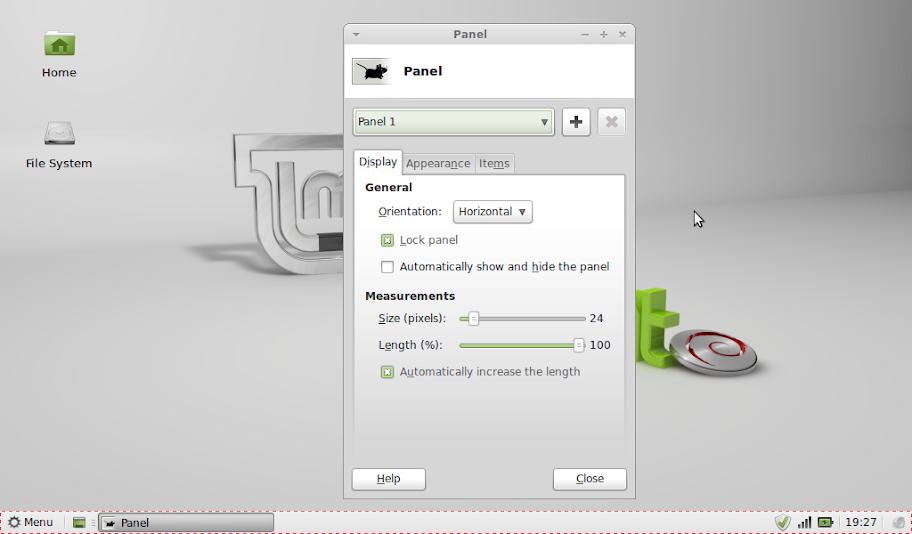 Here you can add panels, change their size, location and orientation, add/remove contents (items and separators) and of course autohide them if you want. Under "Appearance" you can change the background color, or use an image for the background.

Compared to a lot of other Xfce based distributions, LMDE Xfce includes a lot more, and a lot more powerful and complete set of packages and applications (these are the same in the Gnome edition):