Since the release of the Linux Mint Debian Edition distribution last December, and then the Linux Mint Xfce distribution which is also based on Debian rather than Ubuntu, I have found myself moving more and more toward using these Debian-based distributions rather than the Ubuntu-based Mint 11. In a lot of ways these Mint distributions seem to offer a good combination of a solid Debian base, with a choice between the standard 2.
Written by J.A. Watson, Contributor on June 16, 2011

Since the release of the Linux Mint Debian Edition distribution last December, and then the Linux Mint Xfce distribution which is also based on Debian rather than Ubuntu, I have found myself moving more and more toward using these Debian-based distributions rather than the Ubuntu-based Mint 11. In a lot of ways these Mint distributions seem to offer a good combination of a solid Debian base, with a choice between the standard 2.6.32 kernel (which is in the current Debian stable distribution) and the latest 2.6.38 kernel (which is in the current Mint 11 distribution), plus all of the excellent Mint utilities (such as MintMenu and MintUpdate), and the excellent software, application and utility selection that are included on all of the Mint distributions. I can't put my finger on any specific thing that makes me prefer these Debian based distributions to the standard Mint 11, but it is a sort of general feel, consistency and reliability.

Over the past week or so there have been a lot of significant updates made to the Linux Mint Debian and Linux Mint Xfce distributions. These are "rolling distributions" which are intended to be continuously updated rather than having periodic major releases, but with all of the activity associated with the recent release of Ubuntu 11.04 and then Linux Mint 11, they appeared to have fallen a bit behind, so these updates are very welcome. The most eye-catching of the updates is that Mint Debian now has its own logo with the Debian symbol in place of the 11 in the standard logo, and there is a new default wallpaper which includes it: 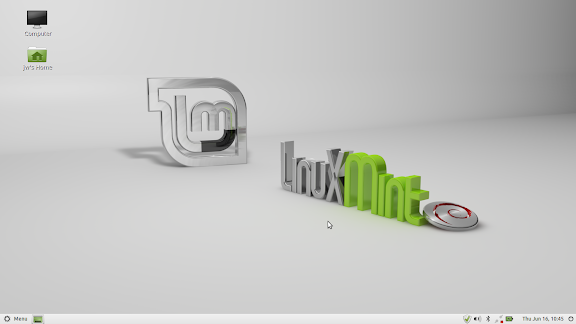 Of course, most of the updates are a lot more significant than the cosmetics of a new logo. The first one I noticed was that Firefox is updated to 4.0.1, which I felt was a bit overdue. This was one of the big things that I thought got neglected during the Mint 11 activity, so I am glad to see it finally come along. LibreOffice also got an update to version 3.3.2, the latest in the 3.3 development line.

There were also a lot of updates to the "underlying" system packages, such as Gnome 2.30.2 and an X.Org update that includes X Server 1.10.1 and a variety of updated video drivers. These sorts of updates might not be quite so obvious as the applications like Firefox and OpenOffice, but they are the ones which keep the system running smoothly. One good example of this is that Mint Debian now includes the Synaptics driver version 1.4.0, which handles the "ClickPad" on my Lenovo S10.3s without problem, including left and right buttons and tapping.

Finally, and perhaps most important to experienced and knowledgeable users of Linux Mint, there were updates to a lot of the Mint utilities. The most important of these is MintUpdate, to version 4.3.2. This fixes a number of long-standing and very irritating problems with dependencies in updates. In fact, when you update Mint at the moment you are likely to see that it first updates only MintUpdate itself, and then restarts and brings up the list of the remaining updates. One note here, on a couple of my systems I found that after updating MintUpdate I had to reboot before it would install the remaining updates.

So, the point of all this is that if you are currently running Linux Mint Debian or Xfce, you should install the latest updates as soon as possible. Of course, the MintUpdate icon in the panel will already be reminding you that the updates are available. If you haven't tried Mint Debian yet, these latest updates make it even more attractive - you really should give it a whirl. For myself, it looks like I am very likely to be using Mint Debian rather than Mint 11 for most systems now.