A couple of weeks ago I wrote about the release of Linux Mint 10 LXDE, the first of the lightweight desktop distributions in the current Mint series. Today they have released Linux Mint Debian Xfce, another lightweight desktop version. In addition to the obvious difference - Xfce / LXDE desktops - if you are familiar with the Linux Mint naming convention you will also have noticed the other major difference between these two lightweight distributions. The LXDE distribution is based on their Ubuntu-derived Mint 10, while this new Xfce distribution is based on their Mint Debian, which is derived directly from Debian without passing through Ubuntu along the way. The Release Notes list some of the advantages of this; the two big ones for end users are continuous updates (rolling release) and improved performance with reduced resource use.

Downloading and installing Linux Mint Xfce is essentially the same as for the standard Mint Debian distribution it is based on. The one thing to be aware of is that if you want to make the installation from a USB thumb drive, you have to use unetbootin to convert the ISO file to a USB drive (not the Mint/Ubuntu Startup Disk Create utility). Installation is fast and easy, with only a few questions to select language, keyboard, timezone and disk partition. Once it is done, the basic Mint Xfce desktop looks like this: (these screen shots were taken on my Samsung N150 Plus, with 1024x600 resolution) 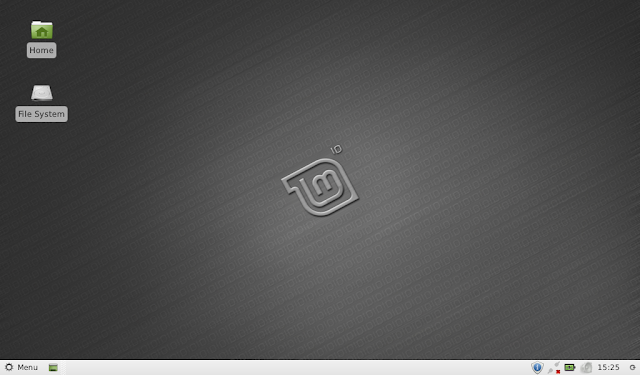 Of course, this is only the default desktop, and I don't use it this way. Right-click on the desktop background and choose Desktop Settings, to change the wallpaper and remove the Filesystem icon (why have two (with Home) that do the same thing?), then right-click on the bottom Panel and choose Customize Panel to create a new side Panel. Drag the notification and control icons to the new panel, leaving only the Menu and Task List at the bottom. That produces what I consider to be a more pleasant and usable desktop: 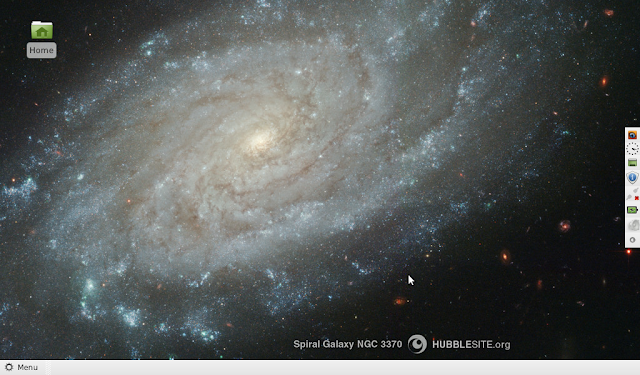 Here the Panels are still shown, so you can see their location and content. The final step would be to Autohide both of them, leaving a nice clean netbook desktop.

Ok, anough fun getting the desktop set up, time to look a bit deeper into the distribution itself. First, what is the difference/advantage/disadvantage of this distribution compared to the previous Mint 10 LXDE distribution? Well, at the level of the desktop itself I would say that LXDE is more toward the "minimalist" end of the scale, which means that it has fewer bells and whistles, fewer options and less configurability, includes fewer and smaller utilities and applications, and in return for that it uses even less resources than Xfce. On the other hand, Xfce is much more toward the "full featured" end of the scale, actually not all that far below Gnome and KDE. The menus, panels and icons are more flexible and more easily customized. Although they can both be packaged in whatever way and with whatever packages the distribution chooses, in the case of Linux Mint there are some good examples of the difference in outlook: Mint LXDE comes with AbiWord and Gnumeric, while Mint Xfce comes with LibreOffice. Be aware, though, that users of both of these desktops can be rather extreme and vocal in support of their preference, so don't be surprised if some flaming comments show up, along the lines of "how dare you say (one of them) is not as (good, flexible, beautiful) as (the other one). My bottom line on them is not much different from what I say about Gnome and KDE - try them both, see which one you like, and which one works best on your hardware. I will say that with the current controversy over the latest (and upcoming) releases of Gnome, KDE and Unity, I have heard of people moving to Xfce just to get away from the changes, and to remain with a more familiar desktop.

In the area of hardware support, I have so far loaded Mint Xfce on all four of my netbook systems, and I have run into one plus and one minus along the way. The Plus is a big one, and affects a lot of netbook systems; because it is derived from Mint Debian, it already has the brcm80211 driver included for the Broadcom 4313 WiFi adapter. All you have to do after the base installation is go to Synaptic and install the "firmware-brcm80211" package (of course you will need a wired connection at least temporarily to do this). The minus is not so severe, and impacts only one of my systems. On my Lenovo S10-3s the (pain-in-the-butt) touchpad (synaptic ClickPad) doesn't work properly, neither buttons nor taps register, and I haven't found a way around this yet. I know what it needs, a newer version of the synaptic driver, but I haven't gotten that done yet. Otherwise, Linux Mint Xfce installed and works perfectly on my Samsung N150 Plus and NF-310, and on my HP 2133.

There is actually a good selection of packages included in the base distribution. I already mentioned LibreOffice; it also includes GIMP for image editing, F-Spot for photo management, and EOG for simple image viewing; Firefox and Thunderbird for web browsing and mail; MPlayer, Rhythmbox and VLC for multimedia playing; Network Manager for wired, WiFi and broadband wireless management, and much more. It also includes the Mint Software Manager for selecting and installing additional packages.

All in all this is an excellent distribution, and it is easy to forget that it is a "lightweight" alternative. It's easy to say that if you have a netbook system, you really should consider using it. But the fact is it goes well beyond that, Mint Xfce would server very well on full notebook and desktop systems.