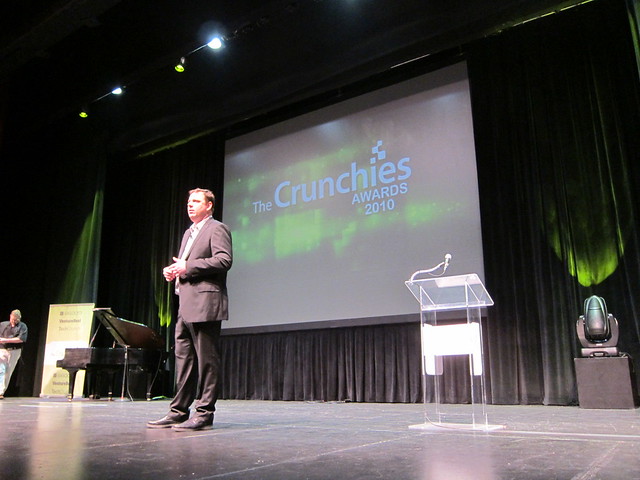 Every application that you use is up for grabs here. The nominees for this category are Chartbeat, Greplin (personal search engine), Pandora (internet radio to the max, over 60 million users), UJam, and Rdio. It's interesting that the two "best" internet applications were both radio/music-based: Pandora, and Rdio (gold and silver, respectively). Tom Conrad from Pandora: 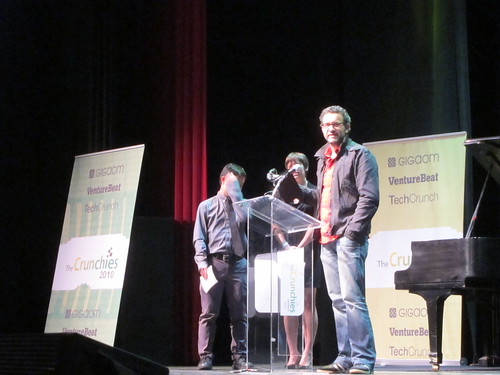 Bump, Hashable, Instagram, and Chomp were the nominees. But Google Maps won the award (not really fair). I do use it 50 times a day, but still, let the little guy take home an award. 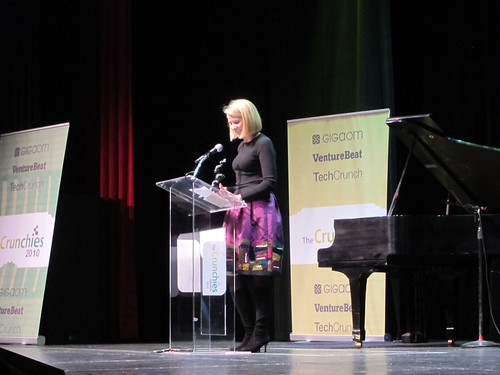 Foursquare, GroupMe, and Twitter (silver) were among the finalists, but DailyBooth was the winner. Everytime I've ever logged into DailyBooth, I've posted a photo of myself. I don't really engage too much, but it's easy to get sucked in. It's more social than Twitter?

Social commerce is the best commerce. ShopKick took second but Groupon pulled in the gold. C'mon guys, Groupon is already a verb.

"So far, Twitter has been too cool for revenue. Are you thinking, 2010, for that?," said Arrington. Costolo said, he's not worried about it. When asked when he does worry about, he said international, scaling, and organization is an operational challenge. 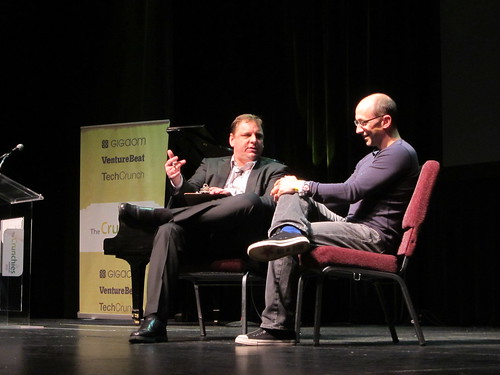 A device is something you hold in your hand, there is no other way to define it. Boxee, Chrome (huh?), iPad, Kno were nominated. XBox Kinect came in second and you can guess what came in first: iPad. As an iPad user, I really do think it's the best device out there. You can't put it down once you start playing with it. It's efficient, extraordinary, and entertaining. And you can take it anywhere.

Oooo, design. It's the thing that makes you look longer and harder at a website. You appreciate visual beauty, and so do the Crunchies judges. The winner is... Gogobot.

iPad/iPod wasn't even mentioned. But the winner is an iPad app called Flipboard.

Bootstrapping means self-sustaining. That means they built something with nothing. Some finalists worth mentioning: Easel, Fast Society, and Techmeme (a great tech news aggregator). Addmired pulled away with the gold, and Instapaper got silver.

Enterprise apps play a huge part of streamlining a company's business. BuddyMedia beats our Salesforce and 37Signals for the win.

I've never heard of any of the companies mentioned in this category. The winner was .

Descibed as, "ways to waste time when you're unemployed". If you had a week to visit any website, what would it be? You can only spend time on this website? Crunchies judges voted for CityVille over Angry Birds, Quora, and Netflix! Damn.

Angel of the Year

Angel investors do the hard work of finding the most promising startups. Ron Conway came in second because you can't win a Crunchie two years in a row. Paul Graham took home this year's award with his awesome portfolio over at YCombinator.

VC of the Year (individual)

Yuri Milner, from DST, won. Arrington said, "you are a source of stress for the VC community". He says that because DST is so freaking good. Milner likes to bet high on the best investments: Facebook, Groupon and Zynga. He actually didn't answer any of Arrington's questions...

What's awesome outside the US? Spotify won last year. This year, it was ViKi, which looks awesome.

Founder of the Year

Mark Pincus, from Zynga, picked up this award. 425 million people play social games using Zynga's platform. That's more than the population of the US.

CEO of the Year

Zuck couldn't win this one two years in a row, so the award went to the cash cow Groupon. It's scary how big those guys are. Mason deserves it though. He could probably be a stand-up comedian too.

Best New StartUp or Product of 2010

To decide this category, they put all of the CEOs of the nominees in the room and they all yelled Robert Scoble's name to see where he went. I'm not surprised that Quora won. It's absolutely the most interesting site on the web today.

Best Overall Startup or Product of 2010

Drumroll please? Twitter!! I had to save the best for last. For all of you guys who think tweeting is for twits, get with the program. Twitter is the best message platform ever. See you at next year's Crunchies.
Show Comments
Log In to Comment Community Guidelines