About a year or so ago, rumors started flying in the Linux community about Mandriva Linux having serious commercial/organizational problems. The facts didn't take long to catch up with the rumors, and before long Mandriva was cutting back staff, changing development schedules, and generally looking like an organization in trouble.
Written by J.A. Watson, Contributor on June 3, 2011

About a year or so ago, rumors started flying in the Linux community about Mandriva Linux having serious commercial/organizational problems. The facts didn't take long to catch up with the rumors, and before long Mandriva was cutting back staff, changing development schedules, and generally looking like an organization in trouble. In September some dedicated and very talented Mandriva developers, contributors and users make a fork of Mandriva, which they eventually named Mageia Linux, and they laid out their own plans for independent development.

One should never underestimate the amount of very hard work that goes into producing a complete Linux distribution. It might sound sort of glamorous, and sort of fun, and I'm sure that some parts of it are - but there is a massive amount of drudgery and detail that has to be taken care of. The Mageia group have done an admirable job of sticking to that schedule, and after the typical series of pre-releases, they have now produced their first "official" release, Mageia 1. In the meantime, Mandriva development has kind of sputtered along, sometimes looking like things might eventually turn out ok, and other times looking less promising. At the moment, in my opinion, they are in the "less promising" area, as their Release Candidate and Final Release have been indefinitely postponed.

I have watched all of this with mild interest, as I used to like to keep Mandriva loaded on most of my systems. To be honest, my interest in Mandriva decreased quite sharply after they let Adam Williamson go, in part because that was one of the early symptoms of problems to come, and in part because his departure left a very large gap in their community. I looked at the release announcements of some of the Mageia pre-releases, but I never actually took the time to download and install one, so this final release is entirely new to me. I am quite pleasantly surprised by it - in a lot of ways, it looks and feels just like a continuation of Mandriva 2010, with the Linux kernal and all the packages brought up to date.

The distribution can be obtained from the Mageia Download web page. It is available as a Live CD image, 32-bit only, in either KDE or Gnome desktops, or a Full Installation DVD image, either 32- or 64-bit, which contains KDE, Gnome, Xfce and LXDE all in each image. There is also a "Dual Arch" CD, which contains both 32- and 64-bit but only the LXDE desktop and limited languages, and for the very experienced and well-connected there is a small "Network Install" image. All of these are "hybrid images", which means that you can either burn them to a CD/DVD, or copy them directly to a USB flash drive using dd. For purposes of my first look at it, I only downloaded the KDE Live CD image, and dumped that to a USB stick for installation.

The Mageia installer will look familiar to anyone who has previously installed Mandriva. Although it is quite stable and reliable, as it has been around for quite a while, it feels like it is a bit "old" compared to some of the newer and much simpler installers such as Ubuntu's Ubiquity and Fedora's Anaconda. In particular it has always seemed to me that it asks questions in a bit of an odd sequence, and there are some fairly long delays when it asks a question, then goes off to do something and then comes back to ask some more. But that is all just minor stuff, because in theory you only run through the installation once and then you don't have to deal with it any more. Once the installation finishes and you reboot (and wade through one more screen full of questions, this time about creating the default user account), you finally can login and get the initial Mageia desktop: 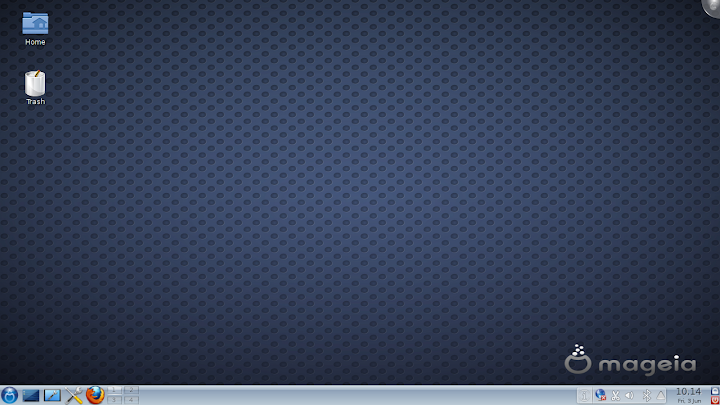 No surprises here, this is a very standard-looking KDE desktop. The good news is in the functionality and device support. I first tried it on my Lenovo S10-3s and I was very pleased to see that the Broadcom 4313 WiFi adapter came up right away with the brcm80211 driver, and the Synaptics ClickPad also worked properly out of the box, including tapping and both left and right buttons. Considering that I have just spent a good bit of the past couple of days struggling to get the WiFi on that system working properly with basically every other distribution I use (Ubuntu, Mint, Debian, Mepis, Fedora...) with decidedly mixed results, this was very nice. The news was not all good on this front, unfortunately. When I tried it on my very new HP Pavilion dm1-3105ez, the Ralink WiFi adapter was not recognized - which is no surprise, that is the same for every other distribution at the moment - but the Synaptics ClickPad also didn't work at all well. Again, most other current distributions don't get this ClickPad right either, I think it is some sort of second-generation ClickPad from what I have been able to find about it, but still... openSuSE gets it just right, so I was kind of hoping that Mageia would do so as well. That's a minor disappointment.

The other good news about Mageia is the range of packages that are included, even in the Live CD distribution. Of course you would expect pretty much "everything" to be in the 4GB DVD installation image, but even the 700MB Live CD includes LibreOffice 3.3, Firefox 4.0, Amarok 2.4, GIMP 2.6, Gwenview 2.6 and of course all of the KDE utilities such as Konqueror, Kmail, Kopete, Ksnapshot and so on. For those who remember and prefer the "drak" tooks from the Mandriva distribution will be pleased to find them in Mageia as well. If you get the DVD distribution, or you go to the repositories after installing the Live CD distribution, you will find much, much more. Things like the Chromium browser, Thunderbird mail/news reader, Kopete and Pidgin for messaging, and much more. Check the Release Notes for a more complete list of available packages.

Overall, I think Mageia is a good, solid distribution. Previous users of Mandriva be pleased to have a familiar alternative, especially now that the next Mandriva release is once again up in the air. In addition to that, though, I think that users who are interested in joining a strong and very involved community will be happy with Mageia. As I said there has been a lot of hard work put into the distribution, and doing that as a new community, rather than a more traditionally established organization like Ubuntu (Canonical), Fedora (Red Hat), openSuSE (Novell/SuSE) or whatever, can make for a very significant "camaraderie" among the members.