Make me One With Everything

Apart from being the punchline to the joke about the buddhist and the hot dog, this is also the codename for my next project. Namely, the dreaded Portfolio Site.
Written by Jake Rayson Rayson, Contributor on Nov. 12, 2011

Apart from being the punchline to the joke about the buddhist and the hot dog, this is also the codename for my next project. Namely, the dreaded Portfolio Site.

I am my own worst client. We all knew that. I don't really know what I want but I do know that I want it pretty damned soon. Out in Contract Land it's a tough and Darwinistic landscape. There may be less youth than in yesteryear but they are smarter, faster and goddammit, they grew up with this stuff. Me, I didn't touch a computer until I was 19 years old. 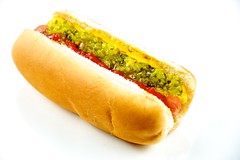 Which means my Portfolio Site has to have all the Bells, Whistles, Gizmos, methodologies and technologies. I need a lean, agile, content-focussed approach. Going Forward. Oh yes, Going Forward.

So I drew up a list (caveat emptor, this is not normally the way to do it. Start with your strategy, everyone knows that):

• Drupal 7: What was once Community Plumbing is now an Enterprise Content Management Platform. WordPress may be easier but Drupal is definitely the Chunky Bacon of CMSes.
• GitHub: Everybody loves Git, a Versioning Control System that is "easy to grasp and hard to master". Even more people love GitHub, where Open Source projects are hosted for free and there's a commercial option to pay for a virtual Private Room for your project.
• Drush & httpserver: Drush is a command line tool for Drupal. Cool, tecchie drupalistas brandish it with aplomb, and I want to be like them. I also want to try running a lightweight web server on my local machine, like those Rails people do, and Drush will hopefully enable me to do that.
• HTML5: More semantic structure, more relaxed markup, more offline storage - HTML5 is the future, there ain't no going back. Unless you've been using datetime that is...
• CSS3: I want curvey corners, text shadow, drop shadow, gradients. I want them all, and CSS3 delivers. Sometimes. Depending on your browser.
• LESS: Inspired by Andy Clarke's CSS colour palettes, I have decided to implement the ability to change the whole site's colour scheme by changing just one value. Not because I want to but because I can. To do this requires CSS variables, and this is the luxury and power that the CSS preprocessor LESS offers.
• jQuery: Where would we be without sliding drop down panels? Or image carousels? Or eyeballs that follow your cursor around the screen? Nowhere, obviously. But we need JavaScript, and for simple Front End Folk like myself, jQuery is the framework de rigeur de jour.

And of course, being a Free Software junkie, I just have to stock up on some worthyware:

• Vim: "Why oh why are you learning Vim, the North Face of the text editor world?" I hear you cry. Because it's there, dear reader, because it's there. Also, because Vim is on pretty much every computer in the world that isn't Windows. And it's powerful magic too, with mysterious keyboard incantations.
• Inkscape: Inkscape is the best graphics software, ever, in the world. Period. I use it for mockups.
• GIMP: Some people struggle with this stalwart image editor. This is because they are simpletons and haven't dedicated the weeks of practise required to fully master the intricacies and idiosyncracies of this mighty powerful beast. And if you're underwhelmed by the Bloat that is Photoshop, you'll be pleasantly surprised by GIMP's tiny footprint.
• Firefox: Buggy memory hog is one view. Shining beacon of Free Software and cutting edge development of the web browsing experience is another. Take your pick. Or choose both.
• Firebug: Also known as 'The Real Reason Front End Developers Stick With Firefox', it's a must have HTML/CSS/JavaScript debugger that delights at every step. Thank you, Firebug people, you make my life so much easier.

With everything being Open Sourced and Open Standardized, it only feels right to use Creative Commons images and photos from Flickr and Open Source fonts, served from Google Web Fonts to reduce download time.

Finally, it all has to be Responsive Web Design. Oh yes, it has to work on a mobile phone, an iPad and a Widescreen Articulated Lorry. And everything inbetween the gaps.

It's not often you can indulge in such self-centred, self-serving techno-fetishism, so I'm going to enjoy it while I can :)