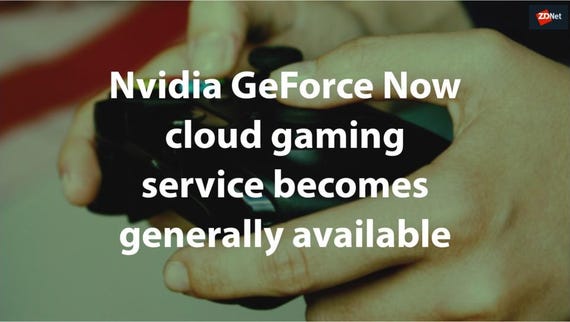 Last month, I wrote about the rise of cloud gaming and the long-term implications it could have for native apps on iOS and other operating system platforms, I cited Microsoft's Project xCloud, now rolled into Xbox Game Pass, as a prime example of why even a company with a significant stake in the games market would be eager to expand into cloud gaming. However, that move, as initially envisioned by Microsoft, Google's Stadia service and others, has been stymied by Apple's app store rules -- not because of technology but because of the buffet-style business mode that sidesteps Apple's rules for offering and reviewing each app individually on the app store.

As the backlash against Apple's policy continued to simmer, Amazon launched Luna, its cloud gaming service, with support for iOS and iPadOS. How was this possible? Rather than release the Luna service via an app, it would be accessible via the Safari browser; web apps (once the only iPhone apps) are not subject to the same restrictions or revenue-sharing arrangements as those offered through the app store. They also don't have access to the full range of capabilities Apple makes available to app developers.

It may sound like a novel workaround, but developers using the web to get around app store restrictions extends far back to when Google Voice became one of the first high-profile app store conflict cases. (The service's mobile interface was eventually accepted as an iPhone app that Google continues to support and update.)

With some notable exceptions, though, Apple has a general incentive to maintain strong support for web standards. That includes support of standards such as WebRTC, the two-way video technology primarily used to avoid downloading dedicated video chat apps. However, it is also a great option for cloud gaming services, which stream the illusion of a local game as video and rely on responsive reactions from the local controller.

Now, Luna -- one of the newest active streamed game services -- will be joined by one of the first. Today, Nvidia announced that its GeForce Now service will be available in beta for Safari on iOS, enabling its subscribers to access it on a broadly used platform that was previously out of reach. According to the company, accessing the service via a browser versus dedicated app results in nominally greater latency that may irk the most competitive users, but the difference should be undetectable to the vast majority.

GeForce Now's arrival on iOS provides a circuitous path back to the platform for Epic Games' Fortnite, banned without a web-native recourse for flagrantly violating several app store rules. Epic has become one of Apple's most vocal critics and a driver of app store reform (even as it offers its own store) and has teamed with other developers -- including music streamers Spotify and Deezer and dating app king Match Group -- to form a Coalition for App Fairness.

The nonprofit has now attracted 45 members but excludes the major game service vendors that have publicly groused about Apple's policies, such as Microsoft, Google (which also oversees a massive mobile app store), and Facebook. The latter has particular cause to be sore. Before the iPhone came along, it had a robust online casual games catalog that it could not bring to the iPhone, in part because Apple's device didn't support Adobe's Flash, which was used by many of those games. (Zynga, makers of the FarmVille game that attracted Fortnite-like attention in that era, recently announced that the game is shutting down although its sequel continues apace). Now Facebook is back with a free-to-play cloud gaming service, but the lack of subscription revenue generation hasn't earned it a pass from Apple's insistence on separate app store listings for every game.

As a far more mature service than Luna, GeForce Now will bring desktop titles in franchises such as Watch Dogs and Assassin's Creed to iOS players. That should grab the attention of competitive game streaming services, which would be foolish not to follow Nvidia in targeting mobile Safari and other browsers. Beyond Apple's rules, there are other challenges in bringing what can be complex games designed for PCs and consoles to a mobile screen, some of which can be addressed with a gamepad accessory, such as the one Google offers for Stadia or the Razer Kishi, recommended by Nvidia.

But game streaming companies and the apps they support are sure to keep optimizing because of the size of the opportunity. The browser provides a gateway not only to an audience unmatched in size but one that has the most frequent opportunity to engage.

Epic, Spotify, and other Apple critics form a coalition to take on App Store rules
The nonprofit Coalition for App Fairness aims to level the playing field for app and game developers.

Join Discussion for: Meet 2021's hot new platform for the most...