Given all of the hype surrounding new Apple products, there are inevitably high expectations for the newest iPad.
Written by Rachel King, Contributor on March 7, 2012 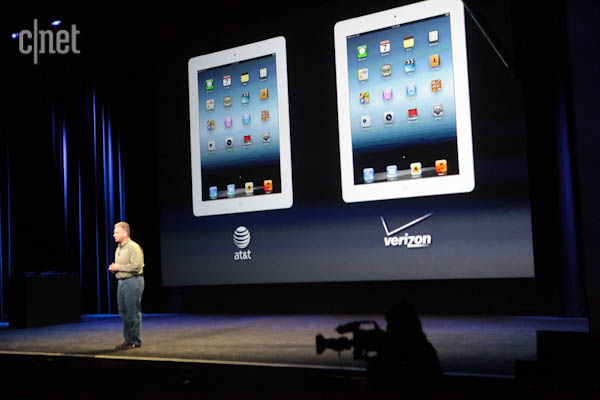 Everyone knew it was coming, and here it is: the new iPad.

CEO Tim Cook introduced the newest, 1.4-pound iPad at a special media, invite-only event in San Francisco on Wednesday morning, hailing it as the next step in the "post-PC revolution."

"In many ways the iPad is reinventing portable computing, and it's outstripping the wildest of predictions," Cook told audience-goers, adding that Apple sold 172 million post-PC devices in 2011 alone.

Ever since the unveiling of the iPad 2 last March, rumors have been swirling everywhere as to what the third-generation of the iOS-based tablet would look like. One of the most recent rumors was that the iPad 3 would actually be referred to as the iPad HD.

Yet, it looks like Apple is actually only going to refer to the third-generation as simply "the new iPad" for the time being.

Also as expected, Apple is finally bringing its Retina Display technology (as seen on the iPhone 4 and 4S) to the 9.7 inch screen of the iPad. That includes a 2048 x 1536 resolution with 3.1 million pixels.

Apple developers also stepped up the camera features and abilities considerably from the iPad 2. For starters, the rear camera is now an iSight camera with 5-megapixel, illuminated sensor with a 5-element lens, face detection and IR filter. Another touch of HD on this tablet is the addition of 1080p HD video recording.

Bridging the spec gaps between the iPhone 4S and this iPad, hints of Siri can be found with voice recognition. Initially, it will support U.S., British and Australian English as well as French, German and Japanese.

All of this taken together could presumably drain the battery life of the iPad considerably. Yet the 9.4mm-thin device will still last up to 10 hours -- and even nine hours when using 4G.

Besides the improved performance specs, one of the features that might be most pertinent to business customers would be the upgrade to 4G LTE support with a max of 72Mbps and HSPA+ for up to 21Mbps.

So far, only Verizon, AT&T, Rogers, Bell and Telus have been announced as the designated LTE providers on this product. However, the Verizon and AT&T versions of the iPad are said to be different.

At least the iPad can now serve as a personal hotspot (if the carrier supports it) for up to five devices.

Unfortunately, the pricing scales haven't changed at all, starting again at $499 for the 16GB Wi-Fi edition. But considering how well past iPad models have already sold with lesser specs than these, it's not hard to see why Apple wouldn't budge.

But for the budget-conscious crowd, Apple is continuing to sell the iPad 2, now with prices reduced by $100. Therefore, the iPad 2 will now start at $399 for the 16GB Wi-Fi edition.

Set to roll out in black and white options again, this iPad will be getting this biggest initial global roll-out ever with 10 countries on the release roster next Friday. Those markets consist of the United States, the United Kingdom, France, Germany, Japan, Canada, Hong Kong, Singapore, Australia, and Switzerland.

If you really want to see how spot on the rumors were (or not), you can always compare and contrast the official specs revealed by Apple executives today to CNET's hefty roundup.

Given all of the hype surrounding new Apple products, there are inevitably high sales expectations for the newest iPad. A recent survey from independent mobile advertising network InMobi found that nearly one-third of mobile users will buy the new iPad.

We'll see just how much the iPad 3 resonates with consumers after it is released. It was reported on Tuesday that we could see the third-generation iPad show up in stores as soon as Friday, March 16, which was confirmed by Cook.

Which iPad is right for you? We break down the different models