The problem with most 'affordable' 3D printers, says South African inventor Richard van As, is that they're too fragile to be of much use in the field. Ever since the first low cost RepRap 3D printers appeared in 2007, speculation has been rife about how they could change the lives of those living at the bottom of the economic pyramid by giving them access to complex manufacturing techniques at a low cost.

Up until now, that is.

Enter RoboBeast, a RepRap-derivative 3D printer designed by van As that's made to be thrown into the back of a 4x4, driven deep into the African bush, and will work flawlessly first time when it's set up.

van As, a carpenter by trade, shot to fame a year ago following an article in Popular Mechanics. The feature described how, after losing four fingers on his right hand in a work-related accident, he collaborated with an American inventor to create RoboHand, a functioning prosthetic hand made from orthoplast and 3D printed parts.

Since then, van As has been inundated with requests for help and interest from international press, physicians and NGOs. Helping those who were either born without fingers as a result of amniotic band syndrome or who have lost the use of their hands through work or war has become his life's work. 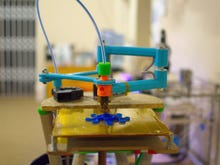 Will this $100 RepRap be the device that takes 3D printing to the masses?

The last time RoboHand hit the headlines was in January, following a trip to South Sudan in which 3D printers and RoboHand parts were delivered to people injured during the civil war who couldn't afford medical prosthetics through Project Daniel. Although van As himself wasn't part of the trip, he was involved with Project Danial and through it became aware of the biggest problem with 3D printing in rural areas.

Low cost printers are finicky things: for the most part, RepRap-based designs can only print a few parts before they require recalibration or servicing. Dealing with extruder blockages or tuning voltage outputs on motor drivers requires a certain amount of skill and technical knowledge. Broken parts are common.

In order to realistically enable a clinic in an isolated area to produce RoboHands, van As needed a printer which was bulletproof: simple to use, self-calibrating and capable of being knocked around without losing its ability to print.

And thus RoboBeast was born. With the help of local hackers — including the creator of another South African 3D printer, RepRap Morgan — and advice from Printrbot's Brooke Drum, van As came up with a rigid design for a 3D printer within a three-month window.

RoboBeast's frame is constructed from extruder aluminium supports, with laser cut perspex sheets protecting the electronics. The print bed is larger than most, at 300x400x400mm, and the 0.3mm print nozzle will adjust its movement automatically to compensate should the bed become uneven. Unlike other extrusion-based 3D printers, you can move RoboBeast while it's printing and even turn it upside down without affecting the quality of the print.

It uses an aluminium extruder designed by Printrbot, as well as controller circuits from the same company.

Perhaps most importantly, RoboBeast is designed to run off of a battery pack and will be sold with a solar charger. The battery should last for five hours, van As explains, which is around the length of time it takes to print all the parts for an adult RoboHand.

RoboHand designs are preloaded onto an SD card in a variety of common sizes. Getting the plastic parts is as simple as selecting the right size and waiting for five hours while it prints.

And while RoboBeast is more expensive than, say, a basic Makerbot it's not prohibitively so - at around R27,000 ($2,500) a pop, it's affordable enough for field work and NGOs to consider in disaster relief work.

The first RoboBeast machine is already up and running, and van As says he has started work on five more. It's first real test will be coming up in the next few months when he plans to take it to one of the continent's most dangerous and difficult areas to access. Quite where that is, however, he won't say.