Data gravity and cloud war victory are intricately tied, and Microsoft's on the offense. In a tie-up with Informatica, Redmond's going after customers of on-premises data warehouse appliances. And on its own, it's building out its data lake infrastructure in a detailed fashion.
Written by Andrew Brust, Contributor on Aug. 6, 2019 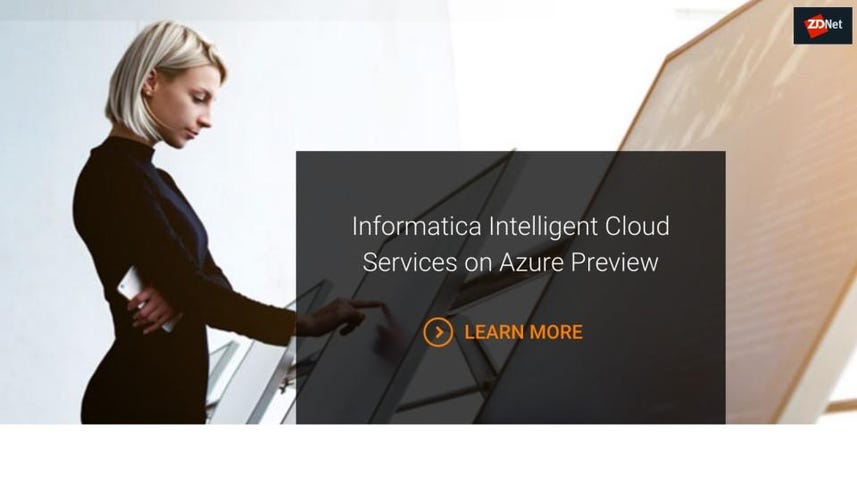 Typically, the best way to help companies address migration costs and risks, and win new customers, is with a combination of tools and professional services. And in the cloud data warehouse race, Microsoft is teaming up with Informatica to provide just that. Their goal? Move the likes of Teradata, IBM Netezza and MicroFocus Vertica on-premises data warehouse (DW) appliance customers over to Azure SQL Data Warehouse in the cloud.

Before the advent of the cloud data warehouse, on-premises data warehouse (DW) appliances were where it was at. The aforementioned products were industry standards while Microsoft tried, without great success, to catch up with its SQL Server Parallel Data Warehouse (PDW -- now Analytics Platform System). The landscape started its drastic change when Amazon Web Services debuted its Redshift service and independent startup Snowflake followed suit with its eponymous cloud DW product. Soon Google Cloud responded by positioning its BigQuery service as a DW and Microsoft launched its own Azure SQL Data Warehouse (SQL DW) service.

SQL DW is doing very well for Microsoft, not just in revenue terms, but also in terms of hearts and minds. Through upgrades to its storage model and query optimization facilities, SQL DW has gone from good to better to highly-competitive. But that doesn't mean that all those on-prem DW appliance customers are going to just lift and shift up to the cloud, willy-nilly. There's great cost and risk involved in that, and Microsoft knows it.

Microsoft and Informatica are announcing today a combination of professional services and time-limited free cloud services to help companies do proof-of-concept projects (PoCs -- which Microsoft is calling "proofs of value") to move and evaluate their data running on SQL DW without the risks that come from moving it. Specifically, Microsoft will provide Azure Technical Specialist support, on-premises DW code conversion (conversion of tables, views, stored procedures and scripts, to take advantage of advanced features, and run efficiently, on SQL DW), and a free Azure SQL DW subscription for up to 30 days, to cover the PoC period. Informatica will provide a cloud data warehouse workshop on Azure and, to aid in data catalog migration, use of its Enterprise Data Catalog and Intelligent Cloud Services offerings, also for a period of up to 30 days.

According to Microsoft's blog post announcing the initiative, both companies will provide analytics experts on-site, to help with the migration. All in all, the initiative is designed to help on-prem DW customers "easily understand their current data estate, determine what data is connected to their current data warehouse, and replicate tables without moving any data in order to conduct a robust proof of value," according to the blog post.

Jump in a lake

Beyond this initiative, Microsoft is diligently building out its data lake platform as well. The announcement last month of the general availability of support for the Azure Blob Storage API on Azure Data Lake Storage (ADLS) Gen2 was a big deal, even if it seems picayune and wonky. Essentially the combo of ADLS and the Blob API makes super-high-volume data storage available to a broad range of developers and ecosystem vendors.

Microsoft also announced a brand new service last month, called Azure Data Share (currently in preview), that lets Azure customers securely share data files in Azure Blob Storage and ADLS with other Azure customers. The mechanics work almost like sharing a file on DropBox, but with Azure Active Directory integration, terms of service and the ability to stop sharing in the event of a change in relationship. The helps companies avoid ad hoc processes using FTP or other low-level file sharing technology, and share data in an organized, governable fashion.

It's the data, dumb-dumb

From the dawn of Access and SQL Server on Windows in the 1990s, Microsoft has understood that data is the key to winning developers and enterprise customers. In the cloud, that goes double. And with a combination of data warehouse, data lake, SQL Server-derived, open source and globally distributed NoSQL database services, Microsoft is not cutting corners in its efforts to play and win.