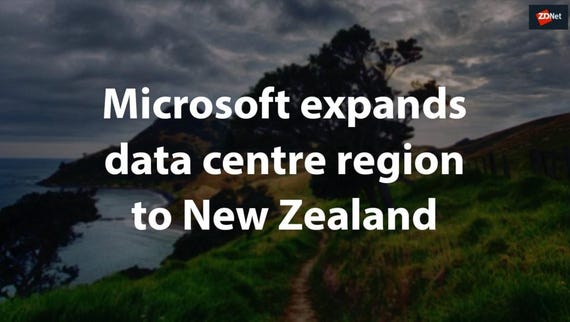 Microsoft has announced it will be expanding its data centre footprint with plans to establish its first New Zealand data centre region.

The New Zealand data centre region will be in addition to its global data centre footprint in 60 other regions, with Microsoft Azure being available in over 140 countries.

"This significant investment in New Zealand's digital infrastructure is a testament to the remarkable spirit of New Zealand's innovation and reflects how we're pushing the boundaries of what is possible as a nation," Microsoft New Zealand general manager Vanessa Sorenson said.

Microsoft added it has been working alongside Massey University and The Collaborative Studio to launch i4 Accelerator, a education program to address skills shortages in primary industries, such as manufacturing and technology, by offering targeted workplace-based training.

"Technology is driving transformation in agrifood and fibre at an incredible speed, so it's vital we move quickly to ensure the education system meets the requirements of what businesses need to be innovative. It's especially important for the agrifood and fibre sector to remain competitive for years to come and capitalise on brighter thinking and bigger ideas," Microsoft education lead Anne Taylor said.

IoT Data Centres (IoTDC) has also announced it will invest AU$120 million to begin building a data centre in the Northern Territory.

According to the company, the facility, which is slated to open in early 2021, will be a Tier 3 Uptime Institute-certified facility that is positioned to act as an information gateway between Australia and South-East Asia.

IoTDC touted the facility will be the first of 10 others the company plans to build around the country.

The company is working with Vertiv, TotalSecure, Wolfe Systems, Mist, TPG, and Intersector Capital for a phased build-out of the facility.

"We've all seen the challenges network providers are having with the sudden demand increase in Internet traffic. We are always demanding more of the internet and everything we do lives somewhere, data centres," Vertiv integrated modular solutions VP Steve Shelley said.

"It will be a really important infrastructure piece for Darwin's recovery after COVID-19 dies down.

The RealMe Login and Assertion Services will be transitioned from a custom-made, legacy platform to a cloud-based platform by 30 June 2020.

The volume sourcing agreement with Redmond is expected to see less than 2% of the federal government keep on-premise desktop licenses.

A digital twin of every kakapo has been created to track the health of each individual bird and its environment.