A digital twin of every kakapo has been created to track the health of each individual bird and its environment.
Written by Aimee Chanthadavong on Aug. 25, 2019 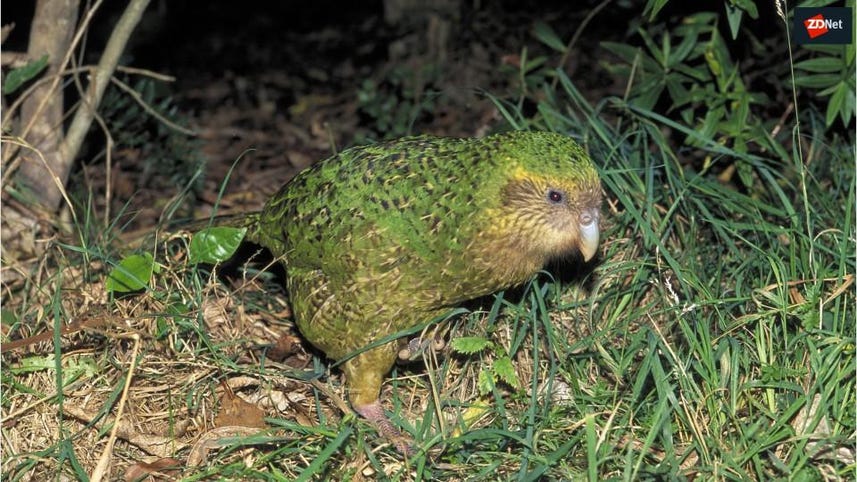 The kakapo, native to New Zealand, is one of the world's rarest birds and is at risk of being wiped out by pests and habitat destruction. The New Zealand Department of Conservation is charged with making sure these critically endangered birds do not become extinct.

Up until last year, the agency relied solely on spreading toxins on the ground and placing physical traps across over 8 million hectares of land in New Zealand to keep the biggest predators of the kakapo – rats, possums, and stoats – at bay.

Each trap that is put out is geospatially tracked, while each helicopter used to spread the poison is fitted with GPS-tracking to determine the exact flight path.

However, despite capturing and killing "hundreds and thousands" of predators each year, kakapo numbers are still dangerously low, according to New Zealand Department of Conservation CIO Mike Edginton.

"We're not getting to the nub of the problem. The predators have spread all over New Zealand," he said.

As a result, the Department of Conservation built a cloud database last year to track information about species distribution, conditions of individual species, health of the environment in which the species live, the quality of the water, and soil quality.

"We built a new database last year for us to manage the digital twin of every one of these birds. We've been able to share this externally. It made the life of every ranger looking after the kakapo a lot easier," he said during the Amazon Web Services Public Sector Summit in Canberra last week.

Using the database, Edginton said the agency also built a business case to request for more funding from the New Zealand government, resulting in an additional NZ$1 million in funding for the management of the kakapo.

"We built an environmental digital twin so that it's not only accessible to partner agencies, but it's also to make investment very visible to all, so that we can understand a lot more what it takes to manage this precious real estate," he said.

Since building this database, Edginton touted the department had experienced its "most successful [kakapo] breeding season ever".

Genome testing will now be carried out to save more than one million animals and plants, including Australia's very own quokka.

In a sign of robot revolution, this bot is now creating tools to suit tasks, one of the hallmarks of higher order animals.

Top 5 industry clouds in the enterprise

As cloud applications increase in popularity, five industries are tailoring the cloud to their specific needs. Here's how.

Turner is stepping down to set up a new venture after four years with Australia's innovation arm.

Cloud
Acer 4th of July Sale: Save up to $100 on gaming monitors and laptops