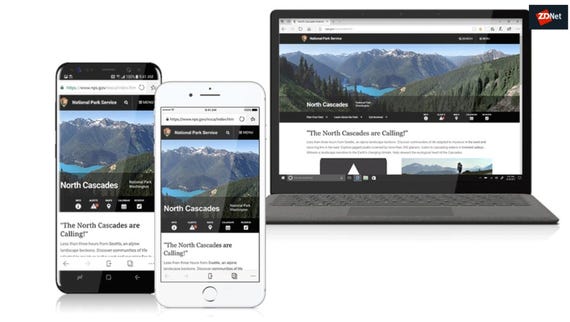 Microsoft is taking the next step in its quest to try to keep Windows PCs relevant by bringing Edge to iOS and Android.

Microsoft isn't doing this in the way many had thought it might. The company is not porting the Edge browser to iOS and Android. It is instead bringing the Edge "experience" (its look and feel) -- in the form of new apps -- to these non-Windows platforms.

Microsoft is not bringing Edge apps to iOS and Android simply in order to give users running Windows 10 PCs alongside non-Windows phones a better way to sync their bookmarks, favorites, tabs and Reading View, even though that will happen as a by-product.

Instead, Microsoft's main intent in bringing Edge to iOS and Android is to improve its "Continue on PC" feature that it's been touting for Windows 10.

"By far, the majority of our Windows 10 users have iOS and Android phones," said Joe Belfiore, vice president of Windows Experience, during a phone interview I had with him this week. "But there's no good system to unify PCs with these phones. These two (Edge for iOS and Android) apps will knit all this together for all our customers."

With "Continue on PC," users will be able to share a web site, app, photo, and other information from their phones to their Windows 10 PCs in a faster and more seamless way.

Belfiore said. Initially, both versions of Edge for iOS and Edge for Android will be in US English only, but Microsoft officials say they'll expand to other languages/countries as it expands the preview.

Not all of the features that ultimately will be supported in the Edge apps for iOS and Android will be available right out of the gate. For example, roaming passwords, history, and tabs are not there yet. And support for iPads and Android tablets will be added at some point in the future.

Those testing these new apps will only be able to get the full "Continue on PC" experience at this point if they are Windows Insiders. But once the final Windows 10 Fall Creators Update is available, which happens starting October 17, anyone with a Windows 10 PC running that version of Windows along with these new preview apps will be able to try out the "Continue on PC" feature, officials said.

Microsoft has been testing an early version of "Continue on PC" with Windows Insiders since this summer. That version of the feature, which required testers to link their Windows 10 PCs to their iPhones or Android phones, and enabled them to share a web page from Safari or Chrome which they could view on their Windows 10 PCs by adding an item to share on their phones. Belfiore said Microsoft will continue to enable this version of the "Continue on PC" scenario but it won't be as simple or feature rich as the one that will be offered via the new Edge apps for iOS and Android.

"Microsoft won't promote this (original "Continue on PC") version, but we won't take it away," he said.

Microsoft Launcher is more customizable and feature-rich than Arrow, Belfiore said. Microsoft wants users to come to see the Launcher as delivering the best way for Android phone users to stay connected to their Windows 10 PCs. Microsoft is adding the ability to put People as icons on Android home screen so that users ultimately will be able to call, send texts, and send and receive notifications directly to those contacts.

Microsoft also is working to make the Launcher the best way to use the "Continue on PC" feature. For example, by pressing and holding a photo, that photo will open automatically on a Windows 10 PC either immediately or later (through a link in the Action Center), Belfiore said. The Microsoft Launcher also includes a customizable feed including news, recent activities, favorite people, and most-used apps for those who want it.

One way to think about what Microsoft is doing on Android is trying to bring some of the features that were popular with Windows Phone users to the platform. The ability to customize the home screen (though not with Live Tiles like Windows Phone), the focus on People at the center, an ability to more easily sync experiences across PCs and phones are all hallmarks of Windows Mobile/Windows Phone, Belfiore noted.

"All these things are what Windows Phone users loved and love and are what we want to bring (to Android)," he said.

The bigger-picture reason Microsoft is bringing these new Edge and Launcher apps to market is to try to find ways to keep Windows PCs part of the increasingly mobile-centric computing market. This is a strategy Microsoft first outlined at its Build conference earlier this year.

On a related note, Microsoft still is contemplating how and if it might make its Edge browser an app available through the Windows Store, Belfiore said. Microsoft officials said years back this was the plan, but to date, Microsoft has not separated the browser from the Windows 10 operating system so that it can be updated separately and more frequently through the Store.

Why does Microsoft Edge have only 70 extensions after a whole year?

Because we're really picky about which ones are allowed, says Microsoft.

In an attempt to lure you away from Chrome, Microsoft has improved its Edge browser. Here's some tips to get you started.

Microsoft has revealed a few new tidbits about Spartan, its new 'modern' browser for Windows 10, and its relationship with IE.