It's not hard to remember when web cams were little golfballs, sending pixelated black and white images over the phone lines. As camera technology has improved and bandwidth increased, they've added colour and resolution.
Written by First Take , Previews blog log-in on July 6, 2010

It's not hard to remember when web cams were little golfballs, sending pixelated black and white images over the phone lines. As camera technology has improved and bandwidth increased, they've added colour and resolution. Now we're getting HD quality on our desktops, at a budget price.

One of the latest HD webcams is Microsoft's LifeCam HD-5000, a small device capable of delivering 720p video with a 16:9 aspect ratio at a respectable 30fps. The LifeCam uses an unusual flexible mounting to work either on a desk or clipped over a flat panel monitor – or even a laptop screen. It's one of the most versatile mounts we've seen, and seems very robust – more so than the plastic clip mounts we've found on other cameras. We were able to fit the camera to our test set system quickly and easily, using a USB-enabled monitor to simplify connections. 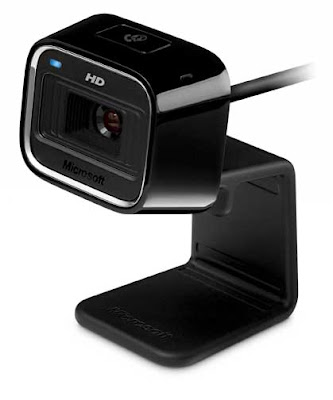 You'll need to install the camera software first, and once we'd plugged the camera in we were also prompted to update the device's firmware. The bundled control software is easy to use, with tools for picking image resolution and for adjusting the microphone and brightness. There's also an anti-flicker option which will adjust the camera to avoid mains interference. Oddly the camera defaulted to the US mains frequency of 60Hz on our test system, prompting a quick change to 50Hz.

Once the LifeCam was connected, we configured Skype to use it and made a few test calls. Image quality was perceived as good, even at the highest resolutions – something that's important when dealing with the artificial nature of a video conference. Commercial telepresence systems require custom rooms to operate effectively, so we were pleased to be able to converse naturally with low cost cameras and free software.

While video quality is important, preserving image fidelity is key when using a camera like this for video conferencing. Face-to-face communication needs to be about more than just faces, and the HD-5000's autofocus means it's easy to quickly send images of objects and documents. In a test using Skype video conferencing, we were able to read 7-point text easily, just by holding a document close to the camera. To be honest we weren't expecting good macro performance from what is at heart a consumer webcam, so this came as a pleasant surprise. 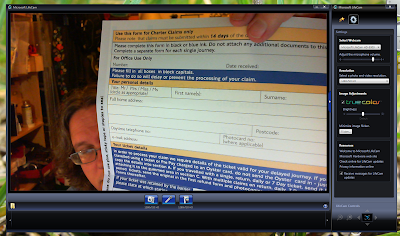 If you're using a webcam for video conferencing and for ad hoc presentations, then colour balance is important – especially with the varying light levels of an office. It's hard not to compare a tool like this with the professionally set-up HP Halo and Cisco Telepresence systems, and we were pleased to see natural skin tones and white paper at all times. Getting light balance right in natural and artificial lighting is hard, and we found that Microsoft's TrueColor works well. You can turn off TrueColor, exposing a respectable array of image quality controls, but it's really a lot easier to let the software handle everything for you.

Web conferencing is about more than just video, and the LifeCam boasts a workmanlike microphone. Voice quality was good over Skype, and we quickly made the LifeCam the default microphone on our test PC. There's some noise-cancelling capability, and reasonable off-axis reception, so we were able to use the camera as a basic teleconferencing microphone. Using the Skype test number to listen back to call quality we found that voices were clear, and noise from a (in)conveniently a passing helicopter was muted effectively.

The LifeCam software comes with some less serious features. If you've ever fancied fox ears or a Marie Antoinette wig, then you can use the effects panel to quickly overlay 3D elements on your video stream. Amusing as they are, they don't work too well with a cluttered backdrop, so are probably best left for kids using the HD-5000 with Live Messenger. Other options change the colour palette – including watercolour and edge effects. Like the overlays they're fun for a while, but have no real business function.

HD webcams seem to be may be a luxury at the moment (although at £49.99 the LifeCam is surprisingly cheap for a luxury), but they'll soon become a necessity with the next generation of business communications software. Microsoft used its TechEd 2010 event in New Orleans to unveil the HD features in Office Communications Server '14' and the next version of Office Communicator. To get the most out of communication and collaboration tools like these you're going to need to deploy budget-friendly devices – and the LifeCam HD-5000 fits that bill handsomely.