Full Bio
Posted in All About Microsoft on September 28, 2016 | Topic: Cloud

There's been lots of talk this week at Microsoft's Ignite conference about progress the OneDrive and SharePoint teams have made towards promised feature rollouts.

But the easiest way to see what's coming now and relatively soon on these fronts is by the good old roadmap slide. During a session at Ignite on September 27, Microsoft execs shared such a slide, as a few folks on Twitter noted.

I asked Microsoft for a slightly easier to read version of that slide. Here's what I got (and which you can see a bit better by clicking on it to enlarge): 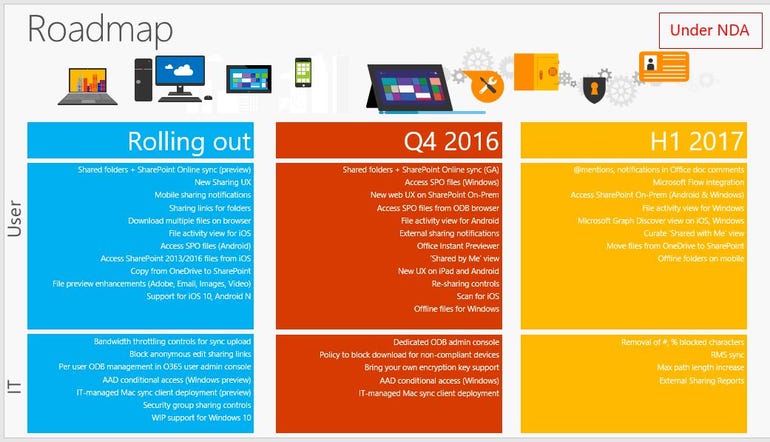 It's worth noting that the slide Microsoft emailed me does not exactly match the one that was shown in sessions at Ignite. What's different?

The original slide said AAD conditional access (Windows) and IT-managed Mac sync client deployment were rolling out now. The updated slide moved those two features to Q4 2016. It also listed "Sync client installed with Office 2016 for Mac" as a H1 2017 deliverable. That item was removed.

I've asked Microsoft about the reason for the changes. No word back so far.

Speaking of roadmaps, here's another slide from the show for SharePoint users trying to keep track of what's coming when. 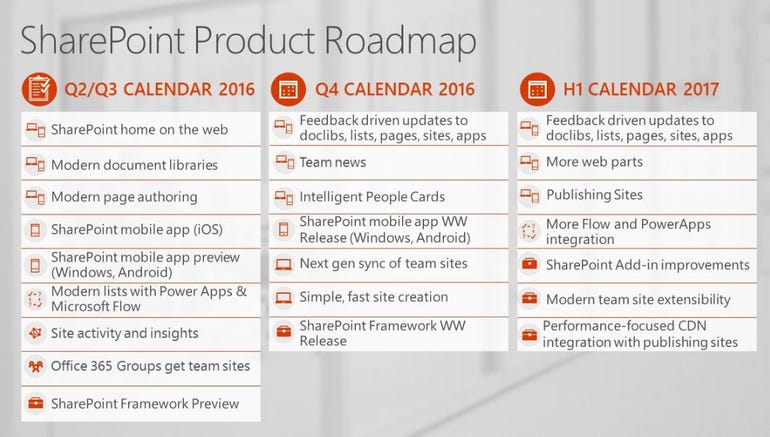 I didn't notice any big surprises here. It looks like a continuation of the plans the SharePoint team announced back in May.

Speaking of futures, it sounds like the OneDrive team also showed a bit of a sneak peek during a session here of what the long-rumored replacement for the Placeholders feature might look like. Brad Sams at Thurrott.com says maybe we'll see and hear more at Build next year about what the OneDrive team is cooking up here. Hopefully it'll be baked into Windows 10 Redstone 2, expected next Spring.

Join Discussion for: Microsoft OneDrive roadmap: A slide is worth...