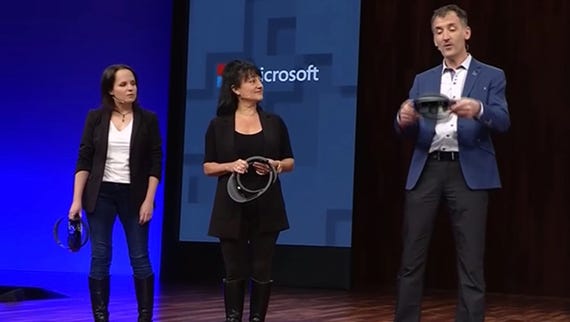 VR and AR: The Business Reality Virtual Reality and Augmented Reality are going to be useful for far more than just gaming. We explore the ways the technology will be used for training, marketing, product design, and much more.

It's been two years since Microsoft released the $3,000 Developer Edition of the HoloLens, the coolest and most innovative device, if not product, it has ever produced. While the product is still in its infancy --as opposed to the less immersive but far less expensive and more ubiquitous smartphone-based implementations of augmented reality -- Microsoft has repeatedly endeavored to show how HoloLens can make the commercial jump from whimsical tech to worthwhile tool.

The encouraging news from Microsoft is that HoloLens use cases have come a long way from the flashy Cirque du Soleil proof of concept it showed off at last year's Build event, The most compelling uses of the technology were in high-stakes industrial settings in which the pricey headsets can easily justify their expense.

Microsoft showed how HoloLens, combined with sensor and other technologies, facilitated the ideal placement of factory machinery at aerospace supply chain company Thyssen Krupp. It also showed how, at ZF Transmissions, the HoloLens's new remote assistance feature -- similar to a feature on the Toshiba smart glasses I discussed in March -- allowed firstline workers to consult with more experienced machine operators across the globe.

But even as Microsoft has moved to at least the trial phase with these two manufacturing clients, other applications are still more in the conceptual phase. Following the videos detailing these early rollouts, Microsoft transported us to a hypothetical conference room in which one attendee uses a HoloLens to demonstrate a visualization of a hypothetical building plan with potential thermal issues.

The HoloLens tends to upstage other technologies with which its shown. However, in the conference room demo, other emerging Microsoft technologies stand to have more near-term impact. These include real-time, speaker-identified transcription and translation; a lurking Cortana to help with tasks that come up; and even something as visually unimpressive as smart tags within Office documents to summon up bits of information or invite contributions from colleagues.

Indeed, even though the HoloLens wearer places the building plan on the table so that it should be in plain view of the other conference participants, they still need to view the model on the room's Surface Hub as they are not wearing the advanced headsets. That's not surprising since the HoloLens at this stage would be expensive enough to merit use only as a shared resource for many companies.

While many products may be waiting in the wings to take it on, Microsoft remains the only company shipping a product that can do what the HoloLens does, but the company hasn't yet released a successor that addresses limitations such as its limited field-of-view (ignored in demos) or a price that makes it largely prohibitive for everyday conference room use.

With a long track record in democratizing technology, Microsoft or its partners will surely release more capable, less expensive HoloLens successors. But even as it continues down that path, there are still many questions around whether it can evolve into an everyday business tool.

https://www.zdnet.com/article/toshibas-ar-glasses-skip-hololens-charm-in-putting-windows-to-work/The Glass-like eyewear from the venerable laptop pioneer relies on a wearable PC for a range of field tasks, from warehousing to maintenance. It can even start up a video chat for remote assistance. But overlaying fancy graphics requires looking into the future.

https://www.zdnet.com/article/microsoft-touts-hololens-rentals-business-uses-for-mixed-reality/The Microsoft AR/VR pendulum seems to be swinging back toward emphasizing the potential business use of HoloLens and mixed reality headsets.

Microsoft HoloLens: How mixed reality is finding fans in the hard hat gang

Join Discussion for: Microsoft continues its quest for the HoloLens...