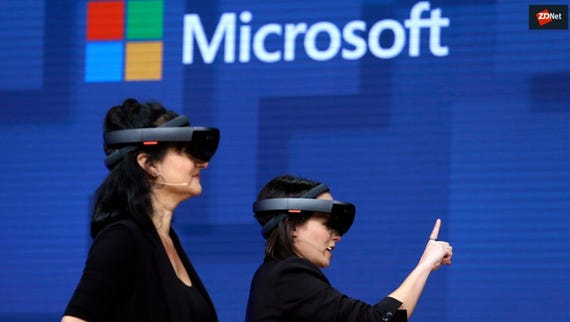 Microsoft is continuing to intensify its business push with its HoloLens augmented reality headset with new features delivered as part of the Windows 10 April 2018 Update, plus new apps and partnerships.

Microsoft's General Manager for Mixed Reality Workplace Lorraine Bardeen said in a May 22 blog post that the Windows 10 April 2018 Update ("Redstone 4") for HoloLens would be "coming soon." However, Microsoft's release notes for the April 2018 Update for HoloLens say that the update (Build 17134.80) is available now for those who don't want/need to wait for it to be delivered via Windows Update.

On May 22, Microsoft made available as a "limited-time free preview" two new HoloLens business apps which officials showed off during the company's recent Build 2018 developer conference. Those apps -- Remote Assist for hands-free video calling, image sharing and annotating, and Microsoft Layout for creating 3D space designs -- are both available from the Microsoft Store.

Bardeen's team also seemingly is building two other new augmented/mixed reality apps for HoloLens and Windows Mixed Reality headsets: one for Training and Dev and another for product-focused collaboration, based on information shared at Build. There's no announced timeframe as to when these will debut.

The Windows 10 April 2018 Update for HoloLens is the first new Windows 10 feature update for the device that Microsoft has provided since 2016. As part of the update, Microsoft has added a number of new developer, IT pro and end user features, with a noticeable emphasis on business features.

Microsoft's blog post highlights some of its latest HoloLens partners, most of which are working on business applications for the device. Construction and engineering, remote maintenance and repair, IoT integration and factory automation applications are all prominently featured on the list.

Microsoft increasingly seems to be refocusing its HoloLens and Windows mixed-reality work on business applications, which makes sense given the company's emerging emphasis on Windows 10 as more of a productivity platform, rather than as a consumer-centic one aimed at "creators."

Microsoft is working on a new version of the HoloLens, but has not said when it will be ready to launch. According to reports, Microsoft dropped work on its HoloLens 2 headset, which was expected to debut in 2017, instead, going directly to Version 3. This third iteration of the HoloLens may debut in late 2018 or 2019, according to sources.

Join Discussion for: Microsoft steps up its business push with...