Those of us who bought ARM-based devices running Windows RT have known for a while that we wouldn't get the option to move to Windows 10.

But now we know a bit more about the coming Windows RT update -- one which Microsoft has billed as offering a subset of Windows 10 features -- that we will be offered this year.

That Windows RT update is slated for September 2015, according to a recently updated Microsoft Frequently Asked Questions (FAQ) document, first spotted by WMPU. And as of now, the list of Windows 10 features that are coming include an improved Start Menu -- though not likely the same one that's part of Windows 10, based on the FAQ's wording -- plus an updated lock screen. There may ultimately be more, but for now, that's all that's mentioned in the FAQ, and Microsoft execs are not commenting beyond that.

Here's what the FAQ says:

What about Windows RT?

If you're running Windows RT, your device won't upgrade to Windows 10. We will have an update available in September 2015 that will improve the Start menu and lock screen. Check Windows Update on your Windows RT device to make sure it is ready to download the update when available.

What about apps for Windows RT once this update is applied? Will existing Windows RT users be able to run new and updated Universal Windows apps that are starting to arrive in the Windows 10 Store? 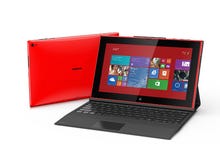 Sorry to be the bearer of bad news, but the official answer is no -- despite the fact that the unified Windows 10 Store will include apps built for ARM-based Windows Phones and as-yet-unannounced small ARM-based tablets running Windows 10 Mobile. Universal Windows apps are meant to run on any Microsoft platform with a Windows 10 core, and so that leaves out Windows RT.

From a company spokesperson:

"Surface (RT, Surface 2 and third-party ARM-based Windows PCs and tablets) only run apps built for RT and not Universal Windows Apps. There are lots of apps that work on RT, so they'll be able to continue to enjoy apps, games, music and movie content.

"When a customer goes to the Windows Store, they should be able to buy anything they want for their device, not just universal apps. That includes movies, productivity software, games and more. Moving forward, the Windows Store will be the place where people can turn to get software, content and apps they want, in a simple and curated way. Today there are millions of software programs for Windows, and we hope to see as many as possible in the Windows Store."

I've asked Microsoft officials several times whether the company still plans to introduce any Microsoft-made/branded ARM-based tablets or PCs and have gotten no concrete answer beyond "Windows ARM processors have a future." Given the Windows RT dead-end those of us with Windows 8.X RT devices are facing, I'm not thinking that future looks very bright ....

Join Discussion for: Microsoft to deliver subset of Windows 10...