Sales of Windows Phone 8 handsets have taken off just one month after the devices were introduced, according to Microsoft.

Steve Ballmer, Microsoft's chief executive, told shareholders in a meeting on Wednesday that sales of Windows Phone-based handsets in the month since launch were 300-percent higher than the same period last year. 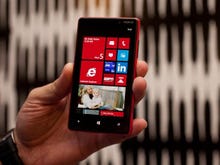 Analyst house Gartner estimates for the fourth quarter of 2011, Windows Phone sales were around 2.8 million. Should the platform see its fourth-quarter sales for 2012 remain 300-percent higher than those of 2011, Microsoft can expect to shift around 11 million devices.

Microsoft also launched its first Windows 8-based tablet, the Surface , at the same time as Windows Phone 8, marking a move away from its traditional software-centric business model into one that sees it producing more of its own hardware. Following the release of the Surface RT, rumours circulated online speculating that Microsoft would follow with its own Windows Phone 8-based hardware.

"Focusing on devices and services will impact how we run the company, how we develop new experiences and how we take products to market for both consumers and businesses. The work we have accomplished in the past year and the road map in front of us brings this to life," Ballmer told shareholders on Wednesday.

On Wednesday, Microsoft also confirmed that it was working to make the Windows Phone 7.8 update available to existing handsets by "early 2013 ". Most notably, the update will introduce the resizable tiles found on the home screen.