We know a lot about Microsoft's new fitness band, which the company introduced and began selling last week. But what Microsoft didn't publicly disclose about the Microsoft Band is equally interesting.

A Microsoft spokesperson, responding to my query as to whether there's some kind of Windows 10 variant inside, said "there is no OS" inside the Band. "It runs on Microsoft’s wearable architecture (firmware), optimized for low-power micro-devices."

The spokesperson added that "a comprehensive SDK (software development kit) will come online early next year," for the Microsoft Band.

So does that mean the new Microsoft Band falls outside Microsoft's "One Windows" plan and is some kind of one-off device?

Maybe. But maybe not.

Microsoft is developing a number of Windows 10 flavors of its various embedded Windows versions. There's a Windows 10 "Industry" SKU for devices like point-of-sales terminals, ATMs and kiosks. There's the Windows 10 "Mobile" SKU -- expected to be the combined Windows Phone and low-end tablet SKU that will work on both ARM- and Intel X86-based devices, as Microsoft execs confirmed at Tech Ed Europe last week. There's Windows 10 "Compact," which will be the version for Internet of Things gateways, printers, diagnostic test equipment and the like.

And then there's Windows 10 "Athens," which also will work on ARM or X86 cost- and resource-constrained devices. Athens is bsed on the Windows 10 common core and will support the "Universal Apps" model , officials also confirmed publicly last week at Tech Ed Europe. That means developers will be able to reuse much of their code when developing apps across different Windows versions and devices. 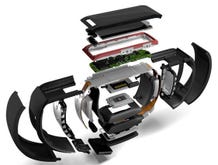 I wouldn't be surprised if the Microsoft Band is actually running Windows 10 Athens. That said, at the Tech Ed Europe show last week, the Softies showed off a slide that made it look like wearables would be running the .Net Micro Framework, which currently is for cost- and resource-constrained X86 (not ARM) devices. Microsoft's goal is to bring "Modern" Windows to this class of devices, officials said last week.

Here's the list of Azure services -- some of which are still in preview -- that Microsoft Health is building on today:

Over time, Microsoft Health will build on even more Azure services, the spokesperson added, including:

The Microsoft Band is a prime example of how Microsoft's Internet of Things vision  will manifest over time. "OneCore", the unified Windows core at the heart of the coming Windows, Phone, RT, Server, Internet of Things and Xbox operating systems, is what will make "One Windows" less of an aspiration and more of a reality.