After hitting roadways with self-driving cars, researchers at MIT have adapted the same technology to be used on scooters and indoors.

Google and others believe that fully autonomous vehicles could be ideal transport for mobility-impaired people, such as the aged or blind. However, cars can only do part of the job. How would a mobility-impaired person get from a carpark to say a workplace, an apartment building or a shopping mall?

The answer could be a self-driving scooter that can be scheduled to coordinate with autonomous cars and golf buggies, according to researchers at MIT's Computer Science and Artificial Intelligence Laboratory (CSAIL). 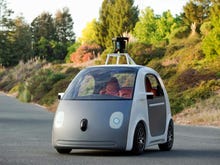 Research firm Gartner says that full autonomy for smart machines might not be possible -- or even desirable.

MIT researchers teamed up with engineers from National University of Singapore to test scooters equipped with the same sensors and software that had been used in previous autonomous car and golf cart trials.

With the scooters, which were trialled indoors as well, the researchers believe they now have a comprehensive autonomous mobility system that could take a person down a hall and through a lobby to a self-driving golf cart that carries them across a parking lot to meet an autonomous car designed for public roads.

Navigating indoors poses its own challenges, including avoiding obstacles and cramped spaces, says Scott Pendleton, a graduate student in mechanical engineering at the National University of Singapore (NUS) and a research fellow at Singapore-MIT SMART group.

"One of the spaces that we tested in was the Infinite Corridor of MIT, which is a very difficult localization problem, being a long corridor without very many distinctive features. You can lose your place along the corridor. But our algorithms proved to work very well in this new environment," said Pendelton.

The golf carts that MIT and Singapore National University tested in Singapore earlier this year were rigged up with off-the-shelf sensors and a camera. They were intentionally much simpler than the setup in Google's cars, based on the idea that they could cut out complexity of interference caused by too many sensors. The tests also includes a scheduling system that allowed participants to book a ride while an algorithm automatically routed vehicles to pick up users.

The idea of having a common set of control algorithms between cars, buggies, and scooters is that they can more easily share information to train machine-learning algorithms faster. Additionally, in the case of scheduling, a common algorithm could allow different vehicle-types to stand in for each other in a network where say all the cars are being used, but there are spare carts or buggies available.