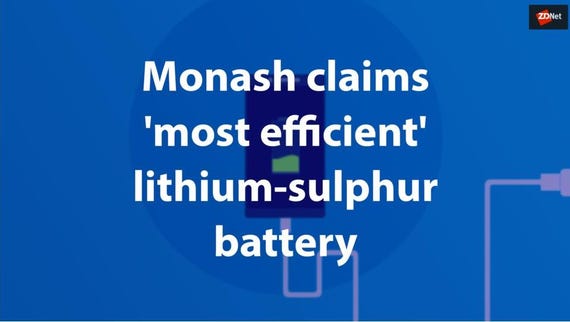 Researchers from Melbourne's Monash University have announced the development of what they called the world's most efficient lithium-sulphur (Li-S) battery.

According to Monash, the battery is capable of powering a smartphone for five continuous days and allowing an electric vehicle to drive more than 1000km without requiring another charge.

As detailed in Science Advances earlier this month, using the same materials used in standard lithium-ion batteries, researchers reconfigured the design of sulphur cathodes to accommodate higher stress loads without a drop in overall capacity or performance.

"To date, the polymeric binders used in the fabrication of sulfur cathodes have been evaluated simply on the basis of their ability to make crack-free dense microstructures," the researchers explained in the paper.

"We have shown that smaller proportions of the same binders can be deployed, by means of a elegantly simple method, to produce a cathode architecture that offers minimum interference with electrochemical reactions and ion movement and accommodates natural volume expansion during discharging, thereby resulting in markedly higher performance metrics."

The university said the team engineered a method that created bonds between particles to accommodate stress and deliver a level of stability not seen in any battery previously.

With a patent filed for the manufacturing process, the university said the prototype cells have been developed by German R&D partners Fraunhofer Institute for Material and Beam Technology, with further testing in cars and solar grids to take place in Australia this year thanks to AU$2.5 million in funding from government and international industry partners.

"Successful fabrication and implementation of Li-S batteries in cars and grids will capture a more significant part of the estimated AU$213 billion value chain of Australian lithium, and will revolutionise the Australian vehicle market and provide all Australians with a cleaner and more reliable energy market," Monash professor Mainak Majumder said.

"This approach not only favours high performance metrics and long cycle life, but is also simple and extremely low-cost to manufacture, using water-based processes, and can lead to significant reductions in environmentally hazardous waste," Hill continued.

Pipped as a potential replacement for lithium-ion battery, lithium sulfur is touted to store up to 10 times more energy and Singapore's NanoBio Lab scientists say they have come up with a "simplified technique" to develop the component from inexpensive commercially available materials.

The university's zinc-air batteries have high energy densities and are more environmentally friendly, meaning they could be applied to electronic devices in place of lithium-ion batteries.

Mobile batteries and their thirst for power are the weak link in the realm of portable devices. Learn about the state of batteries and how they're evolving.