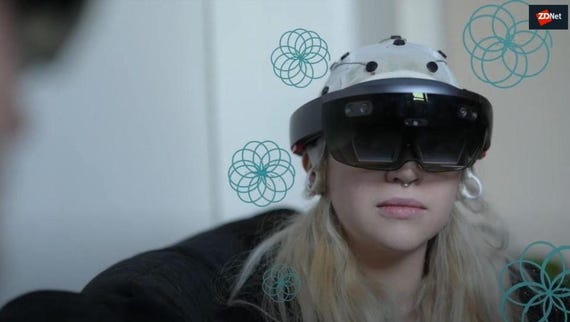 Monash University and the Royal Melbourne Institute of Technology (RMIT) have jointly designed an artificial intelligence (AI) and augmented reality (AR) device they say can read and recognise emotional cues that could potentially be used to combat mental health disorders, such as those experienced during social isolation.

The prototype, called Neo-Noumena, is a neuro responsive system that uses an electrophysical monitoring method to "read" a person's emotions and presents that to others through a visual representation using AI technology. The visual representations are then digitally presented through two mixed reality head-mounted displays.

Project lead and director of the Exertion Games Lab at Monash University's Faculty of IT Florian Mueller explained how the technology has the potential to expand emotional communication.

"There is currently a lack of research which supports face-to-face emotional communication in everyday contexts. By using advanced technologies such as AI, AR, mobile electroencephalography (EEG), and mixed reality, we're able to assess neurogenic emotion in real-time and display this digital content in a physical space," he said.

As part of developing Neo-Noumena, the researchers carried out an "in-the-wild" study, deploying the prototype to 10 participants from five households over three days. The study uncovered that when using the technology there was a significant increase in being able to regulate or change the emotions of those they were interacting with. It also gave participants insight to emotional information they otherwise would not have had.

"During our field research, volunteers wore the AI-driven system for several days and began to use the system to talk to one another about how they were feeling," he said.

"Over time participants also reported being able to better understand how their partner was feeling by associating different environmental factors, such as music, media, and the presence of stress.

"This also prompted participants to respond more appropriately to their partner's emotions. In turn, we found that measures of emotional competence demonstrated a significant increase in the participants' ability to regulate their own emotions."

Mueller added how Neo-Noumena has the possibility to assist people with autism, as well as patients in therapy or rehabilitation to better understand how they're responding to treatment.

IF YOU OR ANYONE YOU KNOW IN AUSTRALIA NEEDS HELP, CONTACT ONE OF THESE SERVICES:

Join Discussion for: Monash University and RMIT develop AI and...