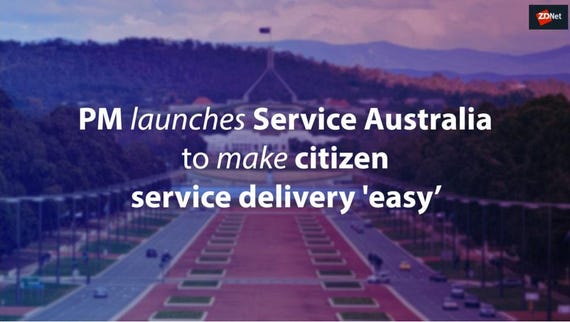 Prime Minister Scott Morrison has announced on Sunday that he will be standing up Service Australia, a new organisation aimed at making citizen service delivery easy.

He briefly detailed Service Australia while announcing his new ministry on Sunday, noting the initiative will be under the care of the Department of Human Services and aimed at "lifting and improving service delivery for all Australians".

"I want to see some congestion-busting not on our roads ... but when it comes to bureaucratic bottlenecks and regulatory bottlenecks so Australians can get access to those services in a more timely and efficient way," he said.

"Making better use of technology and better integrating service delivery across different portfolios."

SEE ALSO: Australian government to bring all services online by 2025

"This I think has been a very important reform in NSW and made dealing with government much easier and that's what we want government to be for Australians, we just want it to be much easier," Morrison continued.

"There are services there they rely on and we want them to be able to access those services as easily as they can and in as an informed way as they possibly can. But it's also about driving the better use of information technology and apps that can assist Australians better access the services they need."

SEE ALSO: The Australian government and the loose definition of IT projects 'working well'

Morrison has handed the portfolio over to Stuart Robert, who in October was found to have spent 20 times more than other MPs on his home internet, according to reports, clocking up more than AU$2,000 a month and blaming "connectivity issues" for the high costs.

Robert will be the Minister for Government Services in Cabinet.

Launched in July 2014, Service NSW brought together a number of different NSW government services under the one office -- including RMS; Births, Deaths and Marriages; and small business support -- with the remit to be the one-stop-shop for state government interactions, combined with a mandate from government to bring 80% of transactions through a digital channel.

Speaking with ZDNet in late 2017, Service NSW's acting CEO Damon Rees said that while there needs to be a more streamlined cross-border approach, he doesn't see a need for a whole-of-country digital delivery house.

"I think if we're true to our word about being customer-centric, then the answer is we absolutely must be obsessed with that outcome, as it's not good for our customers to have a bad experience the moment they leave our borders," he said.

"Around this region there are a number of customers that are moving back and forth between states ... so I think the more interoperability we can have as a nation, the better.

"We'd absolutely love that; we'd welcome that with open arms."

He also said at the time that Service NSW should be opening its tech to the rest of the country.

Robert will also assume responsibility for the National Disability Insurance Scheme (NDIS) which has been plagued with tech issues since inception.

As the Minister for the NDIS, Robert will be responsible for reaching the goal of getting 500,000 Australians who will be able to access the services under the NDIS over the next five years.

Former Minister for Innovation Arthur Sinodinos was also announced on Sunday as being Australia's next Ambassador to the United States, a position currently filled by Joe Hockey.

The ministry will be sworn in on Wednesday.

The federal government's measures in its digital transformation strategy should be enough to convince the public that it knows what it's doing when it comes to digital, according to its response to a Senate committee.

Australia claims it's a 'leader' in digital government

While heat over My Health Record continues, the Coalition is promoting a report from the UN that gave it second spot in a report on digital government.

Australian Budget 2019: Everything you need to know

Where Canberra is spending taxpayer's money on technology.