While the higher end of the smartphone market is chasing the next big thing, it's more than possible to have a good phone at the affordable end of the spectrum.
Written by Chris Duckett on Dec. 20, 2015 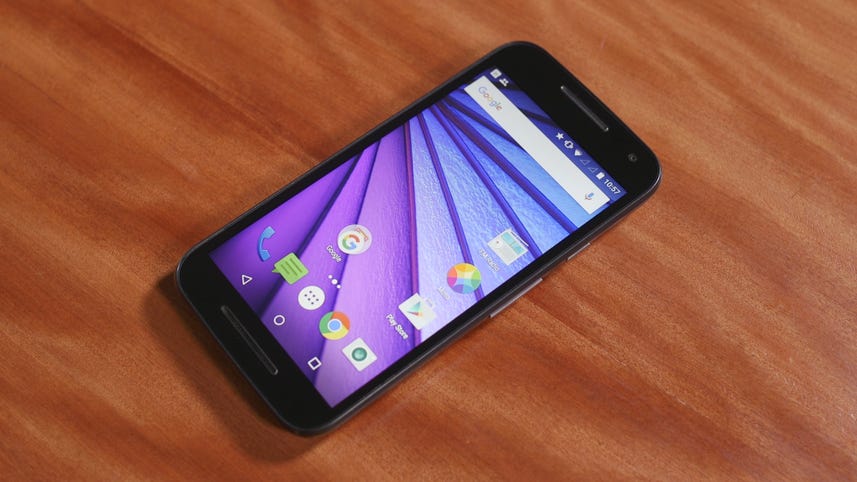 If you are OK with dropping over a grand and a half, you too can make an outright purchase and be the proud new owner of a rose gold iPhone 6s Plus, but if you are more careful with your money, then the AU$350 Moto G from Motorola could be just the ticket.

This is not a phone for the sort of person who breathlessly reads phone rumour articles and pores over spec sheets trying to determine which phone is the most powerful one on the market -- the Moto G is far more modest than that.

It is not the fastest, best-looking, biggest, or even the cheapest phone. What it does have, though, to quote more than one Formula 1 driver in a post-race press conference, is the "package": It's the combination of power, utility, and design at a reasonable price point that will make you give it a second look.

The third-generation Moto G, also known as the Moto G 2015, is a phone that arrives with a 12.7cm 720p display, 2470mAh battery capacity, and weighs in at 155 grams. It also packs dual micro SIM slots, a quad-core Snapdragon 410 system, and is rated IPX7 water resistant -- the device is not dust proof.

Your standard new Moto G in Australia is not the standard 2015 Moto G found elsewhere in the world. Overseas, the handset is available in 1GB and 2GB RAM configurations; in Australia, the third-generation Moto G is only available in the better 2GB variant.

The entire plastic back cover is removable, and has to be snapped back into place for the water resistance to work. While it is not the best feeling known to humankind, it's not as though it is covered in spikes.

The 13MP back-facing and 5MP front-facing cameras exist, and take photos. If you are the sort of phone user who relies on camera functionality when choosing a handset, then I would look at another, more appropriate device with a stonking good camera. On the other hand, if you have lived with the sort of camera inside a Nexus 5 and think that is enough for the odd shot, and have your expectations set suitably low, then by all means this camera will get you by, but you will never see your shots on a large billboard, unlike some Apple users.

Motorola in recent years has decided to mostly get out of the way of stock Android and let Google's operating system look and feel the way that Google wants it to. The good news with this approach is that when Motorola decides to add something to the software, it makes a good addition.

The additional Motorola software adds nice touches such as silencing notifications for hours when you tell the phone you are usually asleep, and automatically muting the device when it picks up events in your calendar.

A welcome touch is being able to "chop" the phone twice for the flashlight to turn on -- it's very useful when turning lights off at the end of a night, and much quicker than pulling down on the settings sheet if your chop registers properly. Being able to twist the phone twice to jump straight into the camera is another top time saver.

The other customisation arrives in Motorola's camera app. If I had never used a camera app on any other phone ever, then I assume I would not be tripping over myself as much.

By default, pressing on the screen when in the camera app does not focus the camera; it takes a photo, and holding your finger down only sends the camera into burst mode. There is a separate option in the camera's menu wheel for easily focusing and adjusting the exposure -- when used, it's very simple and quick, but it took me months to find it.

The other obstacle that phone users with any experience will encounter is trying to zoom. In Motorola's camera app, zooming occurs by moving a single finger up or down the screen. Using two fingers like a regular person will infuriatingly work sometimes, yet other times fail to register entirely, so you'll be trying to break and reinforce a standard habit of smartphone camera use at the same time.

Elsewhere, everything is as you would expect in stock Android.

Camera functionality aside, Motorola made the right choice when it decided to add to the standard Android experience.

After using this phone for some months, it's one of those devices that would work well in a mobile fleet, or as a handset for the tech-ignorant member of your family who just needs a non-horrid smartphone, or a good option for the cost-sensitive purchaser.

However, the kicker comes in finding the device, particularly in the Australian configuration with the higher RAM specification. Looking around in Australian retailers is a futile exercise, and looking online requires wading through three generations of Moto G, double and triple checking of the specifications to make sure its the exact correct model, and even Motorola's 2015 Moto G site in Australia does not allow for buying the device.

Originally, it was meant to be available in August, but as time goes by, it seems that it may never happen.

If you see one of those devices for sale, and it is the correct third-generation model, then it's a good buy. But if you do see one, then turn around, because chances are there's a unicorn and a leprechaun behind you.