Mozilla goes back to Mitchell Baker as CEO

Chair and interim CEO of Mozilla Mitchell Baker to resume role she left over 12 years ago.
Written by Chris Duckett, Contributor on April 8, 2020 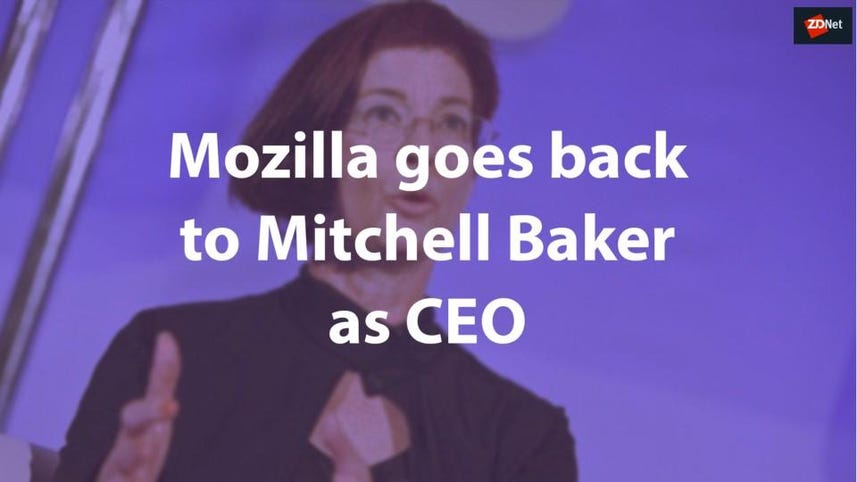 Mozilla Corporation has decided on a known quantity for its next CEO, reappointing chair Mitchell Baker to the position.

Baker has been operating in the role on an interim basis since December, following the announcement of the departure of Chris Beard from the CEO role in August.

In a blog post, three members of the board, Julie Hanna, Karim Lakhani, and Bob Lisbonne, said after looking at external candidates for eight months, Baker was the pick to be CEO "at this time".

"Mitchell has a proven track record of enabling communities and companies to collaborate and innovate. As we look to Mozilla's future, this experience is going to be crucial to our future success," Lakhani said.

The trio said the future plan for the Firefox browser maker was to not only grow Firefox, but to also "mitigate the biggest challenges facing the internet".

"There is incredible depth of technical expertise within the organization, but these problems cannot be solved by Mozilla alone, so the plan also calls for a renewed focus on convening technologists and builders from all over the world to collaborate and co-create these new solutions," the trio said.

"The need for innovation not only at Mozilla, but for the internet at large is more important than ever, especially at a time when online technologies and tools have a material and enduring impact on our daily lives."

In another post, Baker said the vertical integration of internet players will be a big challenge.

"There's a ton of hard work ahead. It's important work, meaningful today and for the future. I'm committed to the vision and the work to make it real. And honored to have this role in leading Mozilla through this crisis and into the future beyond," Baker wrote.

Baker was previously CEO of Mozilla Corporation until the start of 2008, and currently serves as the chair of the Mozilla Foundation.

In January, Mozilla cut 70 jobs, which amounted to 6% of its workforce.

Firefox gets fixes for two zero-days exploited in the wild

Mozilla: Firefox 75 gets this new address bar, but we're pausing features over coronavirus

Mozilla has delayed new security features in case they break home users' access to services during the pandemic.

The rollout begins today and will continue over the next few weeks to confirm no major issues are discovered as DoH is enabled for Firefox's US-based users.

After years of Google Chrome, Firefox was a pleasant surprise

I've been running Google Chrome as my main browser for many years now. Yesterday, I tried Firefox 74 -- and, wow, what an amazing browser it is.