The last four years were an exciting and challenging time to be at Microsoft, arguably the most transformative time in the company's history.
Written by Jason Perlow, Senior Contributing Writer on Jan. 30, 2017

This week, after four years as a 'Softie, I returned to "civilian" life, joining Zones, a Microsoft partner firm where I will be taking on the role of solutions architect and continue to work with Azure and Office 365, as well as numerous offerings from vendors that compete with Microsoft.

Zones is a great company, with 25 years of experience in the field as a solutions partner and value added reseller. Cloud and IoT are relatively new businesses for them, and I am proud to join a group of such talented people, including seasoned veterans that hail from all over the IT industry.

The company has a chance to get back in the mobile game with Cortana IoT integration, sleeker affordable 2-in-1s, and possibly a Surface phone.

Like Microsoft, they are a Pacific Northwest-based firm, headquartered in Auburn, WA, so I am sure I will have the opportunity shortly to join my Blue Badged friends and colleagues for the usual after-hours diversion as well as engaging business conversation.

Consulting and solution selling as a trusted advisor is a role with which I am extremely comfortable -- it is role in which I have spent the bulk of my 25-year career as an independent and working at firms like Unisys and IBM.

The shoes are new, but they fit perfectly.

While I am certain I will look back at my years at Microsoft as a great professional growth experience, I have always been something of a "gunslinger," and I am extremely pleased to be doing that sort of thing again, even if I am only a Skype call away from my friends at the Redmond mothership.

The last four years was an exciting and challenging time to be at Microsoft. It was arguably the most transformative time in the company's history, one of great change. It was, for everyone concerned, a major learning experience.

During my time there, two major versions of Windows were released -- one not so successful and arguably divisive, and one that is now considered by and large to be the best version of the product ever released, with many usability and security enhancements.

Windows 10 is a must-upgrade, and while I and many end users have had qualms as to how aggressively it was pushed towards end users in 2016, it most certainly is the future and will only get better as successive iterations are rolled out.

It is the secure Windows platform that everyone has wanted, for a very long time.

Satya Nadella isn't the only reason Microsoft is cool again.

I see the rapid Windows 10 updates and feature enhancements as a good thing, even though it may occasionally cause disruption as Microsoft continues to tweak how often and in what form it deploys the improvements/fixes.

The flagship Office product also moved increasingly towards a continuous delivery model in the form of Office 365, and it has proven itself to be far more successful and accepted than anyone would have expected. It is now a complete productivity and unified communications platform, particularly when you include Skype for Business as part of the Office 365 Enterprise E5 subscription.

SaaS and managed services and software are here to stay, and this new methodology provides the optimal experience that both SMBs and enterprises need to get down to the task of actually running the business instead of being continually distracted by the mundane nuts and bolts of IT.

In the last four years, Azure went from a science experiment and a hosted service of limited value to a best-in-class, industry-leading public cloud where hybrid workloads and interoperability with on-premises IT has become its prime differentiator, along with its core strength in identity management in Azure AD.

Azure is now suitable both as lift-and-shift for migrated legacy IaaS, as well as new "born in the cloud" types of application workloads, providing both infrastructure building blocks and finished services including analytics and business intelligence.

Azure (along with Azure Stack in its on-premises form) is Microsoft's future in Enterprise IT, and while it brings with it many new skill sets that have to be learned, including DevOps, it is the template and gold standard by which future hybridized cloud applications and services, both public and private, will be based on going forward.

While the company has made huge advancements in software and cloud, they have made equally impressive gains in disruptive hardware and devices.

Windows Phone may not have been the success that the company wanted, and its fate remains uncertain, but much of the groundwork Microsoft put into desktop and mobile platform unification for Windows 10 translated into key usability improvements on Surface, which has disrupted the hardware industry and has defined what an enterprise mobile device should be.

When it was first introduced, I believed that Surface would be harmful to the OEM ecosystem. But it has had the opposite effect, spurring the creation of innovative designs from leading companies like Lenovo, Dell, Asus, Samsung, Vaio and, yes, even HP.

No, the ARM version of Windows 10 isn't quite ready for prime time, and whether a successor to the Surface RT will emerge is still a question mark. But all the important porting work is done. When it is finally time to release another SoC-based Windows device, a next-generation, touchscreen-optimized, modern Office will be available for it.

I know that it is coming, and when it does get here, it will be fantastic.

And while Surface itself has become a flagship brand for Microsoft in such a short period of time, the company has also grabbed considerable mindshare with leading-edge (some might say bleeding edge) technologies such as Hololens and Surface Hub. I am looking forward to using the next generation of these products when they filter down from enterprise to the consumer market.

Nobody can say now with a straight face anymore that the company is standing still. Microsoft has gone from resting on its laurels to key industry innovator in a very short period of time.

In four short years it has embraced the challenger mindset and then some.

All of these advancements in home-grown technologies are important for the company, but where I continue to be most impressed is its transformation in embracing open standards. It consistently innovates on other platforms, not just its own.

Who would have thought, four years ago, that Windows would become Ubuntu-compatible? That Azure would become the best place to run Linux and Open Source workloads in the public cloud? That we would see SQL Server for Linux? Not I.

Windows tablets through the ages: The good, the bad and the ugly, in pictures

Would anyone have believed that iOS and Android would become the best platforms to use Microsoft's mobile applications, such as Outlook, OneNote and Office Lens, all of which are must-have free programs for anyone using their devices in the business world?

None of these apps need Microsoft's cloud in order to work, but they are greatly enhanced by it. I know plenty of people that use those programs with third-party services like Gmail and Dropbox, and they love them. I'm a hardcore iOS and Android user and Microsoft apps make these platforms ultimately usable for me as a business user, no matter whose services I am pairing them with.

To me, this new standards-embracing Microsoft is an example to everyone in this industry, and that includes Apple, Google, and Amazon. In times of uncertainty like these, large corporations, particularly in the tech sector, need to set aside their differences and band together to enable the free flow of information. to embrace interoperability and empower the user, and to provide a safer, more secure experience for everyone.

It is good business (and self-preservation) for all of these companies involved in securing everyone's peace of mind, consumers and businesses alike, when it comes to providing secure and ubiquitous access to their data across platforms and services.

Whether it is establishing protocol standards for cloud and application interop or securing connectivity and identity across devices and creating seamless experiences, we must now reject the feudalistic trend of the last decade and instead ensure that apps and cloud platforms can work across ecosystems.

We must make that information highway safe, secure, and easy to travel on, because we can no longer assume our respective governments wish to do this for their own citizens.

No transformation of this size and scope has ever been attempted at any large technology company.

Microsoft is not just a leader in its products and services, or in its ability to unify and embrace standards and platforms that are not its own. It is a trendsetter in establishing its vision of equality, diversity, and opportunity for all that work there.

It started by promoting its first Asian-American executive, an immigrant, to CEO. Satya Nadella is the techie's tech and the businessman's businessman and is a fine example that the American dream is still alive even when we are living in the most divided time in our country in the last 150 years.

He is the perfect executive to lead the company into the future and I wish him tremendous success.

That being said, as inclusive as the company is, Microsoft needs to hire and empower more women and more people of color. This is a challenge and priority for any tech company, not just Microsoft. It isn't easy to find good candidates, and despite the huge advantages of working there, Microsoft isn't for everyone and work/life balance is not often where it needs to be.

In the last four years, the company has indeed had its challenges in terms of morale and retaining top people. That's something it is going to have to work on going forward, and no transformation of this size and scope has ever been attempted at any large technology company.

Whenever you implement this many changes, disruption, internal and external, is inevitable. As customers, we've seen what that disruption looks like: It brings about positive changes as well as pain. Company insiders experience those effects as well. I lived through so many transformative changes that, at times, it felt overwhelming.

They were also necessary -- and overdue. Drastic changes to leadership and business practices were things that took too long to implement and -- when they did -- felt even more disruptive because they should have occurred years earlier.

But there is no question in my mind that once transformation work is done -- and I think much of it has already completed -- the new Microsoft will lead the industry in every aspect of what it does.

In the minds of business and in the minds of consumers, Microsoft will be thought of as a cutting-edge and progressive company, not as an afterthought, not as one that follows, and definitely as one that is open to new and foreign ideas.

I will always cherish the four years and the relationships and friendships that I forged across the globe as a Microsoft employee. And I look forward to working with them as a partner and advocate, for many years to come. 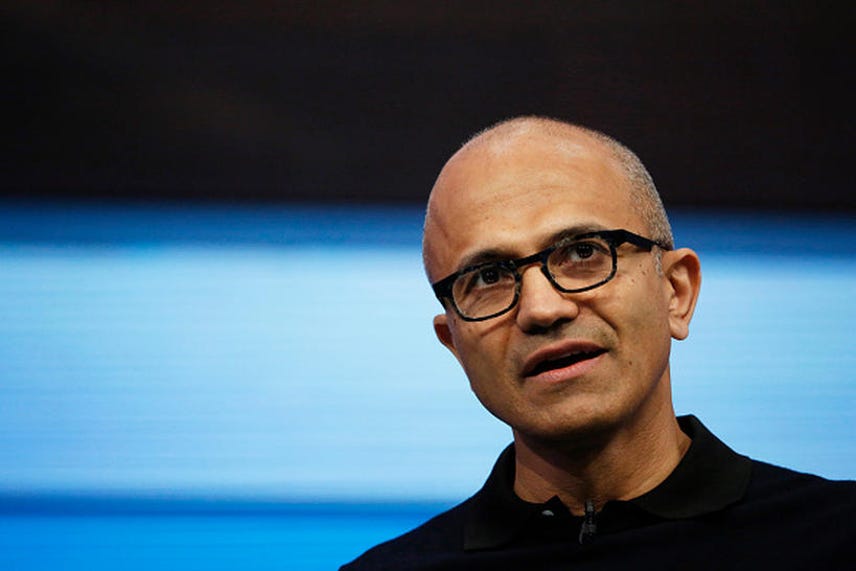