My Phone: just one of the reasons I hope Microsoft saves Windows Mobile

I've been a fan of Windows Mobile since the first clunky SPV: I have a huge Outlook address book and being able to have all those numbers on my phone automatically, and read my email? That's been awesome for so many years that I can't imagine living without it.
Written by Simon Bisson, Contributor and  Mary Branscombe, Contributor on Jan. 29, 2010

I've been a fan of Windows Mobile since the first clunky SPV: I have a huge Outlook address book and being able to have all those numbers on my phone automatically, and read my email? That's been awesome for so many years that I can't imagine living without it. Being able to set to-do flags on my mobile email and file it into folders? Had that so long I'm actually more wishing I could set categories and pick dates for the flags than appreciating it. Being able to get updates for my handset - usually officially but always through XDA Developers? Invaluable and I wish I could get the same fast updates for my BlackBerry.

My favourite mobile browser, Skyfire, is only on WinMo and Symbian (and I am *not* about to switch to Symbian with it's 'how about cancel?' default for all commands); my favourite navigation software still has slightly more features on Windows Mobile than iPhone or Android - which confuses me every time I try to use CoPilot on iPhone. There's a better OneNote Mobile and Evernote on iPhone than on Windows Mobile, but I can't type at my usual hyperspeed on a touch keyboard (not even on a Storm 2).

And this morning I saw a funny stalker story about a guy creeping out a thief to get his iPhone back using the MobileMe service; I get that free with Microsoft MyPhone (the location, not the creeping out).

This is where MyPhone says my phone is right now (for reasons of not inviting the burglars, I'm not zooming in to the street!). 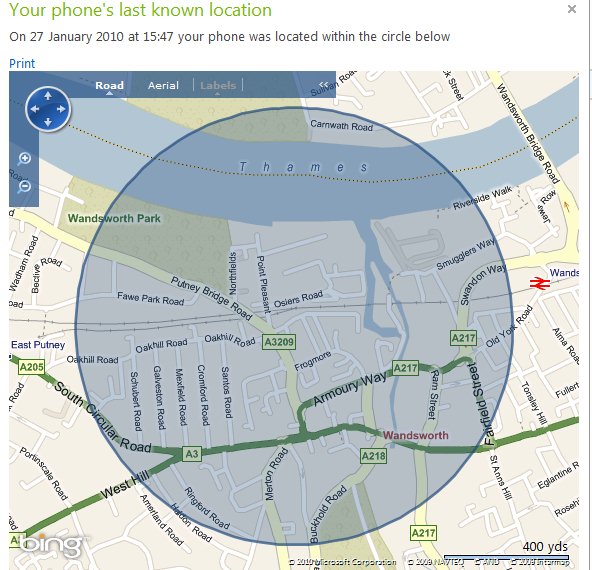 It's not building level, because I haven't had GPS switched on recently, but I'm not paying a MobileMe subscription for the service either (I can pay when I want to lock, wipe, ring or pinpoint the phone rather than just check if I left it at a friend's house).

So I'm really hoping Microsoft can rescue Windows Mobile from the doldrums of opinion and developer disinterest this year. It's gone from being ahead of its time (smartphone apps when smartphone users didn't install more than one app) to looking dated as much because it's had features for so long as because the interface has been around for so long. Recent releases have felt like tinkering even when they've added significant features like HTML email. And when we ask a neat mobile tool developer like Callspark (unified social, private and public address book) or Xobni (personal data mining coming to BlackBerry very soon) if they'll do a version for Windows Mobile, they don't say 9% of the market isn't enough - they say they're not going to develop for Windows Mobile while the platform is in flux. That means the longer Microsoft clutches the secret of WinMo's future to its chest, the further it falls behind.

Windows Vista didn't kill Windows - because Windows 7 turned out to be so good. Windows Mobile 7 being so late could easily kill Windows Mobile if it disappoints because the ecosystem isn't strong enough to give WinMo the same second chance. I hope a recent rumour that WinMo might move into Steven Sinosfsky's Windows team is true; he can't raise the dead, and Windows Live still needs some more attention to revive it (no CardSpace support yet? A unified installer that tries to spam me with apps I already said I didn't want, another toolbar and a search default bait and switch? Good thing Windows Live Photo Gallery is so good). But someone at Microsoft needs to stand up and make Windows Mobile credible before everyone forgets that it's actually pretty good and all the developers go elsewhere. -Mary