The red and black bank hopes to educate its 40,000 small business customers through its Cyber Security Roadshow.
Written by Asha Barbaschow on Oct. 13, 2019 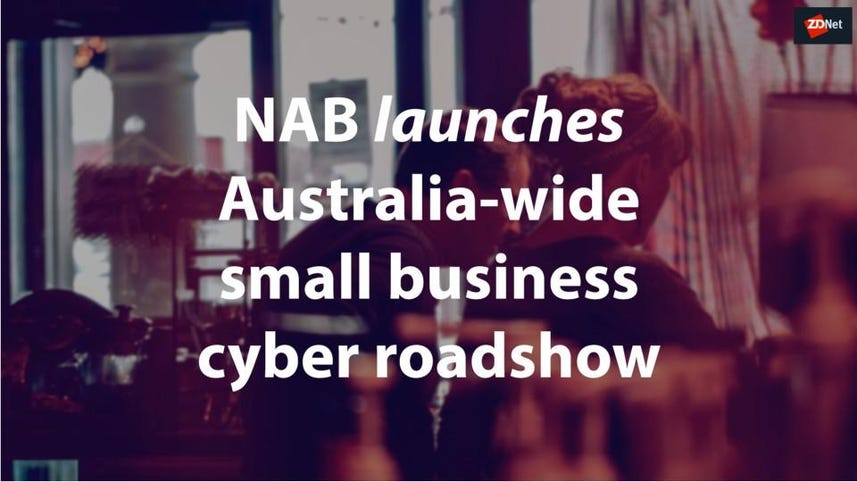 The National Australia Bank (NAB) wants to help businesses understand how they can better protect themselves from cyber criminals, launching a roadshow focused on educating against threats.

NAB business and private banking chief customer officer Anthony Healy at the Small Business Cyber Security Summit initiative on Monday in Canberra launched the roadshow, which will see the bank embark on a small tour around the country to teach Australian small businesses how to best protect themselves from cybercrime.

See also: Why cybersecurity is a big problem for small businesses (TechRepublic)

"Cybercrime costs the Australian economy more than AU$1 billion annually and half of all cybercrime is targeted at small businesses," Healy said.

"We recognise the important role we can play to help our customers understand how they can better protect their business from cyber criminals.

"Across Australia and often in regional areas, we see hundreds of small businesses and agribusinesses every year who are unfortunately targeted by cyber criminals through tactics like identity theft, romance scams, and invoice fraud."

The NAB Cyber Security Roadshow will begin in Parramatta, New South Wales, on October 28, before heading south to Wollongong, then to Tasmania for a show in Hobart on November 25. Victoria's Frankston will play host on November 26, followed by Perth on December 2, and then the Sunshine Coast in Queensland on December 4.

NAB said its small business customers will be given the opportunity to learn cyber protection skills and speak directly to cybersecurity experts.

Also launched on Monday by the red and black bank was a tool kit for small businesses that offers guidance and advice for customers around the types of common cybersecurity threats, including invoice scams or ransomware.

It also provides assistance regarding how to keep defences up to date, by providing information on encrypting data and the employment of multi-factor authentication for identity protection.

The bank said next month it would launch an initiative alongside IT systems integration company OutcomeX that intends to offer NAB customers a discounted rate on the Cisco Umbrella cloud security platform so they can better protect operating systems.

NAB's move to help small businesses with cybersecurity follows the bank in July admitting that some personal information on approximately 13,000 customers was uploaded, without authorisation, to the servers of two data service companies.

The compromised data included customer name, date of birth, contact details, and in some cases, a government-issued identification number, such as a driver's licence number.

NAB in early 2017 also admitted it had sent the details of approximately 60,000 customers to an email address on a global domain rather than its .au address.

AU$2 billion over five years has been set aside by the bank to help emerging technology companies build and grow their businesses.

NAB's new IT outsourcing model might have saved it from extinction

NAB has an 'aggressive' plan to send 35 percent of its 2,600 apps to the cloud now that it has a way of bringing technical capability in-house.

The search engine giant's cloud has been added to the bank's strategy that already sees it use Microsoft Azure and Amazon Web Services.