We already know that drones are useful for investigating hard-to-reach areas of Earth, but they could also be essential for exploring other planets. Engineers at NASA's Langley research center are developing a concept for unmanned aerial vehicles (UAVs, a.k.a. drones) for Mars. 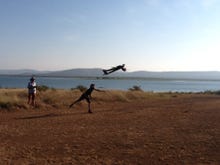 Currently, the Curiosity rover is exploring the red planet. It has already helped scientists make some exciting discoveries, such as the fact that Mars once had conditions to support life. This is quite an accomplishment, especially since the rover is stuck on the ground. When the next rover heads to Mars in 2020 it could be accompanied by a drone that would help expand its view of the landscape.

NASA's engineers are faced with the challenge of getting a drone to fly in conditions that are quite different from home. In one sense, flying should be easier on Mars because the planet has 3/8 the gravity that we have on Earth. But at the same time, there is also 100 times less atmosphere, so when the UAV's rotor blades spin, they will only have thin air to push against, so liftoff will be especially difficult.

The size of blades and the weight of the vehicle will determine whether it can actually fly, but the problem is that it would take about eight months to get to Mars to test different designs. Plus, there is the additional challenge that the drone's electronics must survive the harsh environment.

The project, called Mars Electric Reusable Flyer, takes advantage of the technology that underpins the newest autonomous robots and self-driving vehicles. Langley researchers are developing visual odometry algorithms and Simultaneous Linearization and Mapping (SLAM) algorithms to enable the drone to navigate autonomously. Today's motor and battery technology make longer flight times and recharging possible. But there are likely many unknown factors that researchers won't discover until the drones attempt to fly on Mars.

For now, simulation testing will have to suffice. Low pressure chamber testing of a prototype was recently completed. If the drone works, the struggles will have been well worth the payoff. A UAV could cover large regions of Mars for scientific investigation of the planet's geology or even scouting missions for potential human outposts. It could fly through lava tubes and across deep canyons, revealing unknown corners of deep space.