If you're in the market for a NAS, this is the place to start. We take a first look at six hot new NAS boxes and compare their capabilities. Whether you want to plug it into your TV or protect it against fire and flood, we have the NAS for you.
Written by David Gewirtz, Senior Contributing Editor on June 2, 2017 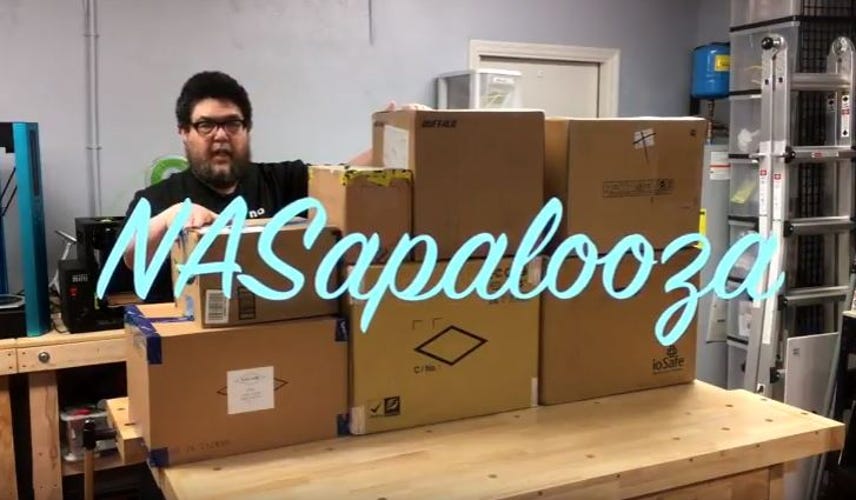 Welcome to NASapalooza! A few months ago, I wrote an article comparing two popular NAS devices. Reader interest was pretty high. Suddenly, NAS vendors were calling. They wanted to be included in my next battle of the desktop NAS article.

So, said I, "Sure, send me your NAS." And that was the beginning. Over the course of about two months, NAS after NAS arrived at my doorstep. When the 70-pound fire proof and water proof ioSafe NAS arrived, I was pretty convinced the UPS guy who had to lug it into the workshop it was going to hold a grudge for quite some time.

But they're here, and they're quite varied. They range from two to eight bays, from GigE to 10GigE, from a couple pounds to 70 pounds. One, the QNAP, even includes HDMI ports and a video card so you can plug it straight into your TV.

In this article and the accompanying video, I'll introduce you to the features of the NASes, from a hardware perspective. I'll do testing and offer a more detailed discussion of the software and data protection environments in later columns in this series.

Let's kick it off with the Synology DiskStation DS1817+. This is an eight-bay version of the Synology NAS I looked at a few months ago. This machine also has four gigabit Ethernet ports, four USB 3.0 ports, and two eSATA ports for adding more drive bays.

Next up is the QNAP TVS-473. While all these NASes provide media center functions, often by offering the ability to serve video to Plex, QNAP takes it a step further by putting media center ports on the unit.

That means this device is designed to sit next to your big screen TV as a standalone server, complete with all the audio and video outputs you might need, including dual HDMI ports. It even has an IR port, so you can use the included remote to control media playback.

This is a four-bay machine, with four gigabit Ethernet ports, and four USB 3.0 ports. Interestingly, this device also adds two of the much higher-speed USB 3.1 ports, but in the Type-A plug configuration.

Let's talk for a moment about that. This is a bit ahead of its time, especially if you're doing media production on Macs, like I do. No Mac out now supports 10 gigabit Ethernet natively. There are some enthusiast motherboards on the PC side that support 10 gig Ethernet. Plus, to use 10 gig E, your switches and routers will also need to support the added speed.

Even though I don't have a 10 gigabit Ethernet infrastructure yet, it's exciting to see where this is going. Kudos to Buffalo for building in this feature as a native element of the product.

Next is the smallest NAS of our set, the NAS F2-420. It's less expensive than the other NAS devices, and even though it's only got two bays, it still has two gigabit Ethernet ports.

The odd thing about this machine is that in addition to the one USB 3.0 port, this box has an old-school USB 2.0 port. I'm not entirely sure why you'd want that, unless you were trying to support some very old thumb drives.

But, hey, that's why we're looking at a variety of machines. Each fits a different set of needs.

That brings us to the Western Digital MyCloud PR4100, another four-bay machine. This device also has two gigabit Ethernet ports, and three USB 3.0 ports. It is becoming clear that in this generation of NAS devices, two Ethernet ports, each supporting gigabit performance, are becoming table stakes.

An interesting feature of the MyCloud device is what the company calls a one-touch download button. The idea is you plug in an external drive or camera, hit the button, and the files or photos download straight into the NAS, without the need for moving them to and from a computer.

It's an interesting idea. If you got into a workflow, it might be really cool. I'm still more comfortable selecting the files I want to move, but this could be a time saver in certain circumstances.

That brings us to the 70-pound gorilla in the room, the ioSafe 1515+. This is a beast. I have to tell you, after it arrived and I realized how heavy it was, I started to wonder what I'd gotten myself into.

It's rated to survive up to 1550 degrees F for a full 30 minutes and full submersion up to 10 feet for up to three days. For the record, I wanted to try to blow this thing up to see how it performed, but both my wife and the local fire department vetoed that idea quite firmly.

The ioSafe is, essentially, a Synology box (it runs the Diskstation software under license from Synology). The difference is, this box is designed to save your data. Once you make it through the apocalypse, you can still file your taxes, play your tunes, and stream your favorite movies.

So, there you go. There's a lot more to these things, especially when you start looking at software, relationship to the cloud, management tools, disaster recovery, and more. That'll be what I look at next. Stay tuned.