Before Windows Phone 7 came out, we repeatedly asked Microsoft if app developers would be able to create turn-by-turn GPS navigation apps - not only are they useful (we drive everywhere in the US and UK using CoPilot, now on iPhone instead of Windows Mobile) but they're a good test of how much access to the platform a developer gets.
Written by Simon Bisson, Contributor and  Mary Branscombe, Contributor on June 22, 2011

Before Windows Phone 7 came out, we repeatedly asked Microsoft if app developers would be able to create turn-by-turn GPS navigation apps - not only are they useful (we drive everywhere in the US and UK using CoPilot, now on iPhone instead of Windows Mobile) but they're a good test of how much access to the platform a developer gets. The answer was usually 'yes, but' - it would be possible to develop a full GPS app, but it would require the special access to APIs that only carriers and OEMs were getting. That's one of the things we expect to change with the Mango update, so what kind of GPS app might we see?

It turns out that the rumoured Telenav GPS software for Windows Phone hadn't evaporated; but the only carriers who put it on their phones are T-Mobile and AT&T in the US. We tried out AT&T Navigator, which costs a rather eye-watering $9.99 an extra a month, on an HTC Surround driving on several recent US trips and while it doesn't have CoPilot's clean map design it's a very capable navigation system with excellent traffic information.

Instead of taking you straight to a map, the opening screen gives you the choice of Drive To, Search, Maps & Traffic and Tools & Extras (which gives you weather information and settings options as well as shortcuts to recent and favourite places). Maps & Traffic locates you on the map, initially by cellular location and then more accurately by GPS; no need to press the phone against the window the way you once had to with Windows Mobile - it acquires the location quickly when you're holding the phone on your lap or with it clipped into a mount on the air vents (suction mounts in California are only legal in a 7" square area of the windscreen that's usually at too sharp an angle to use anyway).

You can set up a route from the live map (as well as using the Drive To option immediately); as well as typing in or speaking an address, you can search for businesses by category - these include coffee, gas stations by price, parking areas and Wi-Fi hotspots as well as the more usual hotels and restaurants, so they're useful. In general we found the POIs to be accurate and up to date; the one time we were led astray in Florida, it turned out that the registered address for the coffee shop was the residential address of the owner rather than the street address of the shop…

The spoken directions were clear, giving the names of roads as well as the direction and turning warning. The screens were fairly clear as well, although we missed the extras from CoPilot and TomTom like showing the lane to be in at a junction. 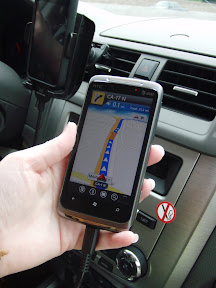 Approaching a turn with Windows Phone 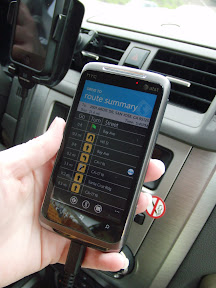 The turn by turn route view; the icons are clear enough to see at a glance but the road names and distances could be bolder

In general, the routes were the same that CoPilot (on the iPhone) and Bing Maps found for us, but the extra information about the journey was extremely useful. You can see traffic problems on the map summary in advance (very welcome in Silicon Valley in rush hour) and you can choose to 'minimise delays' which only finds you a different route if it would actually be faster. 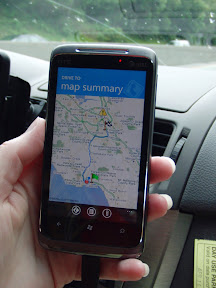 The estimated time was also more accurate, because you get estimated speeds for every road in the route; that way you know in advance if you're going to slow down when you hit the twisty section of Highway 17. 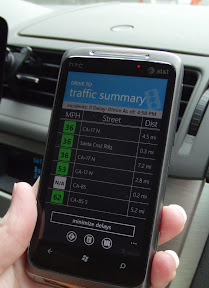 The traffic summary shows how fast each road will be

Without multi-tasking, you can't dip into another app without exiting the navigation; you're not that likely to do that while you're driving and the resume options are excellent - you can go back to the route you had selected even if you return to the app a couple of hours later.

This is the kind of full-featured GPS navigation we were hoping Windows Phone would be powerful enough to support. Paying a monthly subscription for GPS has been common with US mobile operators for some years and that's one feature we don’t want for UK users - it's something many US users aren't happy with either, so once the navigation APIs open up enough for other navigation software developers to create apps you can just pay for once we should see one of the biggest holes in the Windows Phone app market filled in nicely.

How to use your iPhone as a TV remote