Average revenue per user boosted to AU$45 for government-owned wholesaler.
Written by Chris Duckett on Nov. 11, 2019 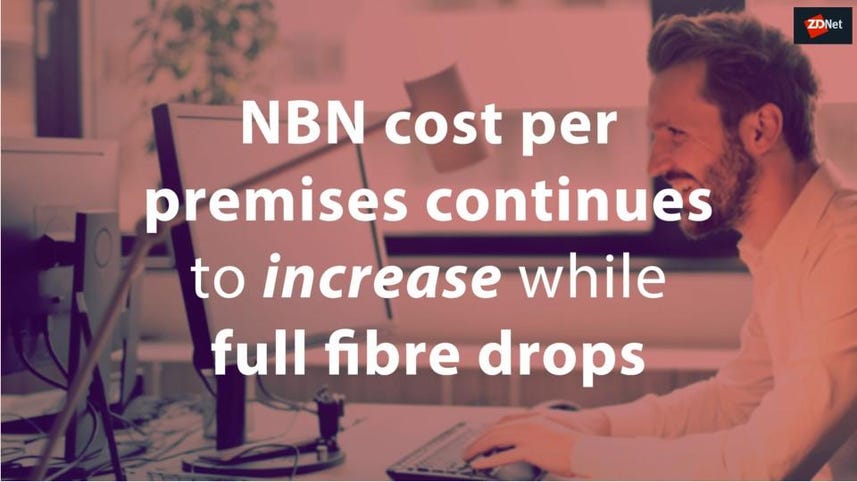 The cost for NBN's copper based technologies is still ramping up, as the fibre-to-the-premises option continues to have its price drop, the company said in Q1 earnings on Tuesday

At the same time, the cost per premise of a fixed wireless connection has jumped from AU$3,784 in the first quarter last year to AU$4,280. NBN said this rise was partially due to removing 130,000 premises from the fixed wireless and satellite footprints because they didn't exist.

Overall, the company reported a 41% increase in it revenue for the first quarter to AU$876 million, while expenses dropped 5% to AU$520 million.

This gives the company responsible for deploying the National Broadband Network (NBN) across Australia positive earnings before interest, tax, depreciation and amortisation (EBITDA) prior to payments to Telstra and Optus of AU$356 million. However, payments to Australia's existing telcos hit AU$791 million for the quarter, leaving actual EBITDA sitting at a AU$435 million loss.

Final earnings before interest and tax decreased by 36% to AU$1.19 billion for the quarter.

NBN began claiming profits before payments to Telstra in its full year results.

The company also reported its residential average revenue per user grew by AU$2 over the past year to AU$45, which it said was due to customers taking up 50Mbps plans. NBN now has two-thirds of its network on speeds above 50Mbps.

During the quarter, NBN reclassified a number of premises as business customers, which helped it grow business revenue by almost 50% compared to last year to now be at AU$149 million for the quarter.

On Monday, NBN said it reduced its service transfer and transfer reversal fee down to an "effective" AU$5 charge, a reduction of AU$22.50, and it would from next month drop the charge of its 25Mbps bundle from AU$45 a month to AU$37 a month, but at the same time it would be dropping the bundled CVC inclusion from 2Mbps to 1.25Mbps.