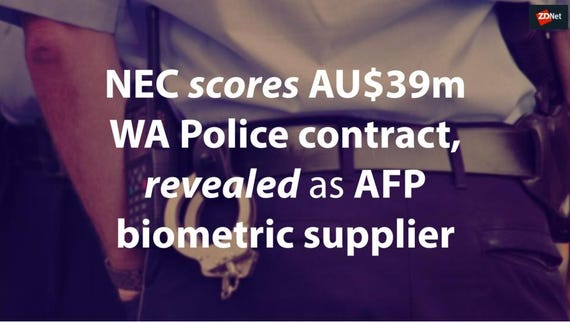 NEC Australia has announced signing a contract with the Western Australian Police Force for the transformation of its wide area network, local area network, and IP telephony environments across every site.

The contract, worth AU$39 million, will see more than 200 Police sites across 2.5 million square kilometres of Western Australia enabled with high bandwidth, redundant network connectivity, and a "state of the art" IP telephony solution, NEC said.

The contract is awarded under the state's behemoth IT project known as GovNext-ICT.

"These new GovNext-ICT services are the foundation of our digital policing capabilities in direct alignment with our vision to continue as an exceptional Police Force for our community," WA Police Force CIO Andrew Cann said on Thursday.

Worth AU$3 billion over the next 10 years, the government digital transformation project is aimed at allowing the state to concentrate on delivering government services, by handing the IT heavy-lifting elsewhere.

It is expected to save the state AU$60-80 million in IT infrastructure expenditure annually.

NEC, alongside Datacom and Atos, was in 2017 contracted to provide IT infrastructure to service the entire state government over the next five years under the GovNext-ICT initiative.

NEC also implemented a cloud brokerage service that it said at the time would enable government agencies to use Infrastructure-as-a-Services (IaaS) and Platform-as-a-Service (PaaS) under a utility model.

The company also previously picked up a spate of contracts, including with the South Australia Police, Northern Territory Police, and CrimTrac that see the company offer up biometric capabilities.

The Australian Federal Police is using NEC to power its facial biometric capability -- a system that scans images from sources such as driver licences, passports, crime scenes, CCTV, and social media and returns a graded match for an entered image.

The Facial Biometric Analysis document [PDF], revealed via a freedom of information (FOI) request, details the process officers are to undertake when conducting a one-to-many and many-to-many facial biometric check, to verify the identity of an individual or individuals.

The procedure, the document continues, covers the collection, storage, and recording of information and imagery, the undertaking of a biometric search using a facial recognition system, and the completion of a facial intelligence review.

The AFP is using NEC Neoface Investigator/Reveal as its biometric capability.

According to NEC, its Reveal software is a "game changer" for law enforcement and criminal agencies.

"Neoface Reveal allows authorities to automatically search, process, and match facial images against potential candidates quickly and accurately -- even when the source file is damaged, highly compressed or incomplete."

The Northern Territory government is on the record for having also deployed NEC's facial recognition technology to aid the territory's Police, Fire, and Emergency Services.

The document says the AFP Facial Identification team receives images from a variety of sources including, but not limited to: Charge photographs from the ACT watchhouse as well as Commonwealth offender images; database images, such as Driver Licences and passports; crime scene images, including CCTV frames, digital forensics, originals, scans, photocopies of identity documents, and printer ribbons; surveillance images from the likes of police surveillance teams; and what it calls open source imagery, which are photographs and video stills from the internet, such as from social media.

All supplied images are enrolled into the AFP's facial recognition system and a search is conducted. The search will generate a list of possible candidates scored according to a computer evaluated similarity to the probe image.

NEC Australia in July commenced legal proceedings against the Australian Criminal Intelligence Commission (ACIC) in an attempt to recoup costs and expenses after its contract to deliver the Biometric Identification Services (BIS) project was cancelled in June 2018.

The AU$52 million BIS project, awarded to NEC Australia, kicked off before the July 2016 creation of the ACIC, which was formed following the merger of the CrimTrac agency, the Australian Crime Commission (ACC), and the Australian Institute of Criminology (AIC).

It was designed to upgrade the agencies' biometrics capabilities from a fingerprint-only solution to also include palm prints and facial recognition.

The legal action followed a report produced by the Australian National Audit Office (ANAO) in January that blasted the execution of BIS project, labelling it deficient in almost every way.

According to the report, the ACIC's approach was characterised by: Poor risk management; not following, at any point, the mandated process in the contract for assessing progress against milestones and linking their achievement to payments; reporting arrangements not driving action; non-adherence to a detailed implementation plan; and inadequate financial management, including being unable to definitively advise how much they had spent on the project.