Full Bio
Posted in All About Microsoft on September 29, 2015 | Topic: Cloud

Before year-end, Microsoft will make available to testers a preview version of a new Azure Container Service which will bring together Apache Mesos, Docker and Azure.

The new Container Service is just one of a number of Azure-related announcements Microsoft will detail during its virtual AzureCon event, which kicks off at noon ET on September 29.

Microsoft is building the new container scheduling and orchestration service in partnership with Mesosphere and Docker. The service will allow developers to deploy and configure applications using open-source Mesos cluster-management services and Docker container-management technology.

Mesosphere's Datacenter Operating System (DCOS) is designed to allow users to manage virtualized or non-virtualized datacenters as if they were one large machine by creating a single elastic pool of resources upon which all applications can draw.

In June, Mesosphere announced a deal with Amazon to offer a free, Community Edition of its product on Amazon Web Services. At that time, Mesosphere officials also extended an invitation to users to sign up for early acess to beta DCOS versions for Azure and the Google Cloud Platform. In August, Mesosphere and Microsoft announced a deal to bring Mesos and DCOS to Windows Server.

Mesosphere's software is based on the open-source Apache Mesos cluster manager, which is used by Twitter, Airbnb, Netflix and OpenTable, among others. Mesosphere clusters can support diverse workloads on the same cluster, including those from Marathon, Chronos, Hadoop, Spark, Cassandra, YARN, and Google Kubernetes.

Docker is an open source engine that automates application deployment. Docker uses containers, in lieu of virtual machines, to enable multiple applications to be run at once on the same server. IBM, Rackspace and Google -- along with major Linux vendors like Canonical and Red Hat -- are all onboard in their support of Docker. 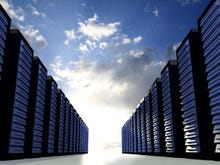 Mesos co-creator: Where the cluster manager came from and where it's heading

With a datacenter operating system based on Mesos due in 2015, the cluster manager's co-creator and Mesosphere chief architect Benjamin Hindman sets out the technology's background and strengths.

Microsoft also announced availability of its Azure and other cloud services in Indian datacenters in three new regions: Pune, Chennai and Mumbai. Azure services are available in India today, with Office 365 services slated for October 2015, and Dynamics CRM Online services to follow in the first half of 2016.

Microsoft also is unveiling a new N-series virtual machines powered by NVIDIA GPUs and supporting NVIDIA's Grid 2.0 technology for pushing graphics from the GPU to virtually connected devices. A preview is coming some time in the next few months, Microsoft officials said.

Microsoft also is readying a new Azure Security Center service that it says will give customers more visibility into the security of their Azure resources. The service will integrate with other security offerings from Barracuda, Checkpoint, Cisco, CloudFlare, F5 Networks, Imperva, Incapsula and Trend Micro, Microsoft execs said.The coming service will handle security monitoring, policy management and threat-detection. Azure Security Center will be broadly available for Azure customers by the end of calendar 2015.

In addition, the company is taking wraps off an Azure Compute pre-purchase plan, a new pricing program designed for customers with steady state, predictable workloads on Azure. Under the plan, users who pre-purchase Azure Compute for one year can save up to 63 percent, according to Microsoft officials. The new plan will be available starting December 1.

Join Discussion for: New Azure Container Service to bring together...