By Zack Whittaker for Between the Lines | November 6, 2014 | Topic: Microsoft

Said to have been built from the ground up, Microsoft's spun-out Office for iOS apps land with a bevy of new features and functionality that make downloads entirely worth it.

Read more on Office for Mobile

But as with mobile productivity, it remains much at the mercy of the devices themselves. Thanks to Apple's larger iPhone 6 and even bigger iPhone 6 Plus, users of the apps will no doubt feel like they're in fresh, cleaner waters with a greater canvas for their words, numbers, and presentations.

That limitation won't go away any time soon — shy of working from a desktop, laptop, or reasonably sized tablet. But Microsoft has packed in enough to the productivity party to bring any seasoned user to the very brink of those device limitations.

Not one, but three separate apps, akin to how Google split its Drive and Docs into two separate apps. That made no sense, but splitting Office into three does.

With Office, it makes a little more sense. You now have Word, Excel, and PowerPoint. Where did your files go? They're stored in the cloud, on your device, or now can be stored and retrieved from Dropbox, thanks to the new support announced this week .

Prior to Thursday's release, Office 365 subscribers had full access to the range of features in the apps. The problem was non-subscribers could view, and only barely edit. It was tormenting to those working for companies who had gone Google instead of the Office 365 route.

But no more. Throwing its non-customers a bone, Microsoft's opened up its apps to create and edit. (Two basic functions that shouldn't on its own be worthy of praise in itself.) But now you can open the app and edit a Word document (or Excel spreadsheet or PowerPoint presentation) on the go without restriction.

It's a bone-throw, and not the full package. That said for the very vast majority of users, there's enough in these apps to make do. 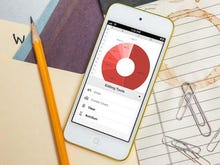 Microsoft took its Office for iOS and split it into three separate apps: Word, Excel, and PowerPoint. And now even non-Office 365 subscribers get the near-full feature set.

A sticking point though remains the device itself. Despite Microsoft's best efforts, intuitive interface, and priority access to the content's real estate on the display, there's only so much that can be done in a 5-inch display (when tested on the iPhone 6). Apple's larger iPhone 6 Plus will no doubt offer a considerably larger space to work with.

But it's no traditional Mac or PC, which during the time playing with the software I was longing for. Almost every second of it.

The core of a user's efforts are focused on the content itself, and nothing more. With only a few lines of text open in a Word document in portrait mode, it's limiting and frustrating when working on longer documents. The same can be said with PowerPoint, although Excel's fluid scrolling and "zoomability" makes it far easier to navigate throughout.

The three apps, across the board, are well built, don't lag, haven't crashed once, and feel probably more stable than most other similar apps available. They're easy to use, have an intuitive and responsive user interface, and are consistent across the board. It's clear that Microsoft follows in the footsteps of existing productivity apps, notably Apple's own native Pages, Numbers, and Keynote, in their design element.

Business users will still have to pay for the privilege of access to the full array of features, and functionality. But it's a start for the prosumer and bring-your-own-device (BYOD) user who likely has little say (or sway) in their company's choice of outsourced, online productivity services.

These apps are great for editing, tweaking, and reviewing. The feature addition is full and comprehensive. If you're desperate enough to work on a full spreadsheet from scratch on the subway to that important meeting, you'll be fine —there's everything and probably more you'll have at your disposal. But because of the screen size, although good on an iPhone 6 and usability is great, it's still a better editing rather than a creation tool.

The only downside is, as an existing Google Apps customer? You're not disallowed from using the apps. It might just be a little trickier.

By Zack Whittaker for Between the Lines | November 6, 2014 | Topic: Microsoft