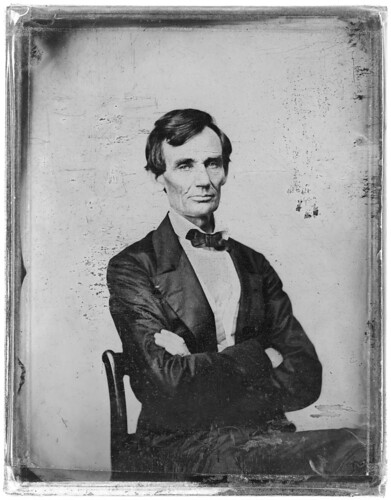 The Library of Congress has posted some very cool, never-before scanned images of Abraham Lincoln on their public doman Flickr steam. Sez the Times:

The 16 newly-scanned photographs are part of a set of 22 photographs from the Library of Congress being hosted at Flickr Commons, a home within Flickr for photographs with no known copyright restrictions. Let the remixing begin.

The newly available photographs include a stereoscope — two photos meant to create a 3-D effect — where the president has what looks like a fade haircut and a scan of the glass negative of the portrait that is the basis of his image on the five-dollar bill.

The Times' Noam Cohen and Robert Mackey note that Lincoln's political maturity overlapped with the rise of photography, so Lincoln's was essentially the first photographed presidency. From Harold Holzer's essay "Visualizing Lincoln":

In a sense, Lincoln and image making in America came of age together; the increasing production and proliferation of photographs and print portraits coincided neatly with Lincoln’s political rise and not only illustrated but likely influenced his growing prominence.