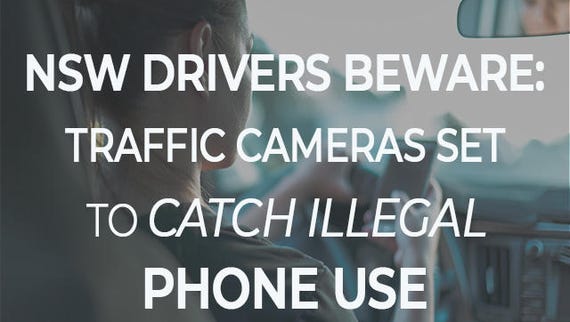 Those using a phone while driving on New South Wales roads have been put on notice by the state government, with cameras capable of catching illegal phone use set to be deployed across the state.

The state government will be deploying the tech initially on Western Sydney's M4 motorway and Anzac Parade in Southeast Sydney.

Read also: Moving from planes, trains, and automobiles to 'mobility-as-a-service': A peek into the future of transport in Sydney

The three-month traffic camera pilot will be delivered by Australian firm Acusensus, which was one of the three companies that took part in an October testing operation.

During the four-week test period, more than 11,000 drivers were detected using a mobile phone illegally.

"Shockingly, one driver was pictured with two hands on his phone while his passenger steered the car travelling at 80 km/h, putting everyone on the road at risk," Minister for Roads, Maritime and Freight Melinda Pavey said of the trial.

The new system uses high-definition cameras and artificial intelligence to detect offending drivers illegally using their phone behind the wheel.

A statement from Pavey said the camera tech can operate both day and night and in all weather conditions.

"If at the end of the trial, the technology proves to be foolproof, the community will be made aware of its permanent use," Pavey added.

"74 percent of the NSW community support the use of cameras to enforce mobile phone offences. I strongly believe this technology will change driver behaviour and save lives."

Initially, drivers will not be fined if caught by the cameras.

Robots could write your next speeding ticket, if Ford's autonomous cop car comes to pass (TechRepublic)

A Ford patent describes an autonomous police vehicle that uses sensors to identify traffic violators and give out tickets.

Jaywalking in China? Surveillance system could SMS you a fine (CNET)

An AI company that works with Shenzen police is creating a system that'll use CCTV cameras to identify jaywalkers and send them a fine via messaging app.

Join Discussion for: New traffic cameras to snitch on texting...